“…satisfies the most demanding connoisseur…”

Hinano – what can I tell you, from a place I’ve never been or likely to ever get to, unless I get the next 6 numbers in the lottery draw, and if that happens you’d be invited.

Brewed by La Brasserie de Tahiti (Heineken) This is in the style that they call : Pale Lager and they happens in tropical and out of reach Papeete, Tahiti, French Polynesia 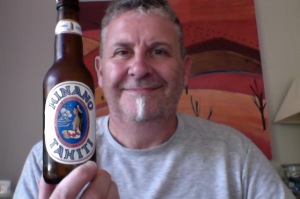 Brewed in Tahiti since 1955, using only the finest ingredients from Northern Europe, Hinano satisfies the most demanding connoisseurs with its freshness and quality.

What could go wrong.

It is pale yellow, but not as pale as some that I’ve had, head is decent and easy to achieve and it seems persistent.

It’s cold, it has a familiar bite of lagers, but there isn’t a lot of it, finish is ok, although bizarrely I thought pepper. Who knows.

Cut to the chase with this, it’s a stock-standard lager is what it is.

Nothing to see here move along.

Crisp, clean, some bite but not much, looks nice in the glass, drinks ok.

I’d be happy with this if I was Tahiti.

The pdubyah-o-meter rates this as 7 of its things from the thing.

The National are an American indie rock, the later work, for me, picks up on the production and emphasis falls on the tone and vocals more, they’re very good.

The colour of pale lager ranges from light bronze to nearly transparent and the alcohol anywhere from 4-6%. Adjunct usage may be quite high, though in some cases the beer is all-malt. Carbonation is typically forced, though not always. One thing that doesnt vary is that neither the malt nor the hops make much of an impression on the palate. These beers are brewed for minimum character, though faint traces of hop or malt may show through. More likely though is that adjuncts like corn will show through, or youll find notes of higher alcohols (fuel notes) due to the use of high-gravity brewing. The body will be thin and watery, and the finish is typically non-existent.