Brewed with Masumi sake yeast no. 7

I remember this as being expensive at the time for a 250ml bottle of beer, and that is was over-packaged  but in a delightful way in a tin, or in a can! and wrapping paper, and all a bit sumptuous.

Last time up it got a pdubyah-10 I wonder if I’ve got more picky, or this had got less?

So I kept one aside, but it’s not a treasure and needs to be drunk and so 12 months after the main event we go back.

I can’t do this often as frankly keeping beer seems a bit weird, and I’m not that rich.

Nøgne Ø – Red Horizon 2 – Formerly brewed at Nøgne Ø (Hansa Borg) and this is in the style that is  American Strong Ale  and they were are in Grimstad, Norway

Small as a small thing

We brewed this ale with the famous sake yeast No 7 from Masumi Sake in Nagano, Japan.

On advise from Masumi’s master brewers, we fermented this ale very slowly at low temperatures to bring out No 7’s fabulously fruity character.

This product is unfiltered and unpasteurized.

I have no idea what a year or so in the fridge has done or not done or could do but I’m about to find out . 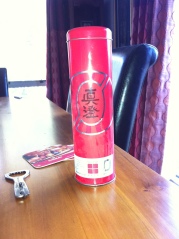 This is thick like chocolate aroma, and then perhaps that sake, I’ll go with the chocolate.

A year in the fridge has done nothing to help it pour with a head, but its a golden orange, slightly cloudy. Aroma is orange fruity and deep.

The alcohol astringent is a lot more forward, and the deep fruitiness appears to be a lot less deep and fleeting. It might not be as complex as I remember it being the first time.

However I might have changed, which is also probable.

This seems a lot more mellow in places and less peaky in others, sort of rounded out. It’s such a small amount of beer to drink and explore that you kind of have to go with your first impression.

And that would be wrong as this does develop with warmth and sitting. If you are frugal in the coins then sitting and watching might work out well in the value for time taken.

On that scale this has been in the fridge for 12 months which must be some kind of record for me. I’m not sure that “in the fridge ” for 12 months counts as either “cellared” or “aged” but hey I tried. I overcame my will power and went again. I’ve never seen this since though so this is it, must be near the end of the word supply somehow I tell my self.

It’s a lovely beer, lets stop pretending, the warmth from the alcohol and the malts, but I’m not getting a strong toffee or richness in this that I thought I had the first time. A year is a fun thing in beers, come to think of it a day can make a difference in taste and the way you enjoy a beer, as can venues. It’s not science, the drinking of beer, the making of beer might be though.

The pdubyah-o-meter rates this as a 10  of its things from the thing. Things might have changed, it might be the way I drink beer, it might be that a year in the fridge waiting has mellowed and changed the beer in some way, it’s possible. It is still a great drinking beer. I sit her convincing myself that there are people that would have paid me serious coin to have the beer I’m drinking. As I run my finger in a forlorn way around an empty glass gathering up the sweetness and stickiness I glance over at MrsPdubyah who stands there looking askance.

I got MrsPdubyah to smell the beer. I got a really strong reaction of not liking it, I think the sake part of the thing didn’t appeal. It’s one less beer to share 🙂

I’m disappointed that it is the smaller of the smallest bottles as this is sipping beer that needs to be enjoyed over a simple conversation and in contemplation. The lovely aroma delivers first the crash on the tongue that is at both a bit tart on the tip and then warm and comfortable in the middle and finishes to something a bit or both things sweet and sharp.

I write a lot as i’m scared to drink the last bit, because then it’s gone and I’m done. I poured the last of the beer, a small amount, the ‘dregs’ into the glass and it was like another beer altogether, such a thing.

Musically –  I was listening to the album Wings at the Speed of Sound, and when you’ve stopped laughing at that, you’ll notice that It is the band’s only album where every member sings lead on at least one song. Like you cared.

I quite like the song “The note you never wrote”

Not a style, per se, but the only logical category to incorporate the plethora of strong, stylistically vague beers coming from American micros these days. Some are related to English Strong Ales, but with more hop, while others are ultra-strong variants on theIPA theme. But no matter how varied their origins or characters might be, all are intense, potent, with generous quantities of hops and malt.