Menabrea – 1846 is brewed by Menabrea (Forst) in the style that is a Pale Lager and they are in Biella, Italy

Menabrea is a light, delicately balanced lager with fruity flavor and aroma of dry grass and citrus. Birra Menabrea is Italy’s oldest brewery.

The award-winning brewery is located in the small town of Biella in northern Italy where it is run by fourth generation.

A well-balanced beer with a marked floral fruitiness coming through from the aromatic yeasts used in its production.

Italian beer, what could go wrong? Plus a new cap for the collection jar. 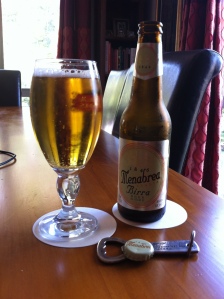 That just smell like malt lager type beer. Pour is golden, head is fleeting. Look nice in the glass though decent carbonation.

I don’t think there would be any surprises if I now say that on tasting that this tastes like your standard average European Lager type drink. High malt and low hops as a characteristic.

Oh and some of that biscuit thing going on. Nothing unpleasant and at the same time nothing unusual or different.

The pdubyah-o-meter rates this as a 5  of its things from the thing. It is nothing to write home about, has nothing that sets it apart or aside from similar beers of the style, it’s just easy drinking no frills beer.

Musically, I started to listen to Steely Dan, and the album ‘AJA’ Aja is the sixth album by the jazz rock band Steely Dan. Originally released in 1977. I Was younger this was quite edgy then.

Donald Fagen, and the Album “the NightFly” remains a favourite.

The colour of pale lager ranges from light bronze to nearly transparent and the alcohol anywhere from 4-6%. Adjunct usage may be quite high, though in some cases the beer is all-malt. Carbonation is typically forced, though not always. One thing that doesn’t vary is that neither the malt nor the hops make much of an impression on the palate. These beers are brewed for minimum character, though faint traces of hop or malt may show through. More likely though is that adjuncts like corn will show through, or you’ll find notes of higher alcohols (fuel notes) due to the use of high-gravity brewing. The body will be thin and watery, and the finish is typically non-existent.