It’s a Tuatara, they made a bottle like it.

Brewed by Tuatara Brewing Company in the style that is a American Pale Ale or in some places might be an India Pale Ale (IPA) or the brewer says “Single Hop Pale Ale” and they do that in Paraparaumu, New Zealand

Kiwis are notorious for developing an enthusiasm for local commodities only after a thumbs up from the more discerning parts of the world. 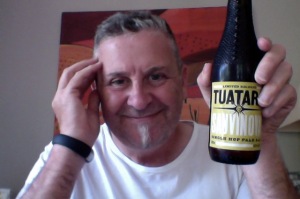 haircut and a new beer!

In the case of Nelson Sauvin hops we think that’s a little unfair.

Tuatara and Sauvin were released into the world at about the same time so we knew them back in the day.

Brought to you with Liquorland, Sauvinova is a single hop pale ale celebrating the tropical gooseberry hit of Sauvin’s Sauvignon Blanc namesake. Bottoms up.

Well nothing as it turns out, or not much anyway.

This has a dazzling aroma on opening, all fresh green hops.

Pour is orange yellow, darker than you might expect, I’m always led by ‘pale’ perhaps I should pay attention. The head is variable and transient, and the aroma is really big.

I get a lot of oranges in the aroma, might also be passionfruit. Whatever it is it is nice. Might of course be grapefruit. It’s not however a fruit salad.

Cracking amount of bitterness on the tongue, so moorish. Feels really carbonated although the appearance would have you otherwise..

There is no hiding in a single hop beer, this appears to have been expertly put together, delivering a bitterness, light dryness and a decent linger. It drinks well, has a decent length of taste and does invite you to have another sip or two. This might be due the lovely malt sweetness or middle, for some I could imagine this being a bit sweet or cloying. For me, now, this is right on the money.

Easy drinking and at a modest ABV this is a beer that you could drink and after a few still hold a reasonable conversation about or despite of.

The pdubyah-o-meter rates this as 10 a of its things from the thing. For a single hop beer, for a single source distribution (mostly), this is a really good beer. You could have expected a half-hearted effort, after all captive audience, but this is far from that. I even went for another 6 pack, and I know there is a keg about to go on tap at the local bottle shop for a FYO.

So, I was rummaging around this and that and ended up listening to, amongst other one hit wonders “The Turtles” and their sone “Elenore”

You got a thing about you
I just can’t live without you
I really want you, Elenore, near me
Your looks intoxicate me