Not to be confused with Taupo Pale Ale of course.

Different beer, different music, differential numbers and making up the numbers at a gig

Brewed by Lakeman Brewing Company this on in the style that is American Pale Ale, and they are in Taupo, New Zealand 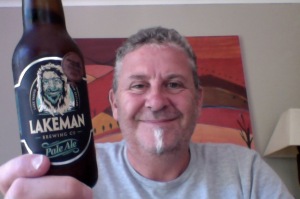 Lakeman Pale Ale is an Amber ale with a smooth robust maltiness,

Spicy and Citrus notes are provided by good lashing of pacifica and  New Zealand cascade hops.

So this sounds intriguing what could possibly go wrong?

This has a damp oats aroma with a tinge of hop grassiness.

Pour is cloudy orange with a thin whispy head of not much significance.

I’m not sure if I damaged my nose but again I got a hint of ash on the aroma.

Pacifica Hops:  Pacifica displays classic Hallertau citrus and floral aroma character which selectors mark as a real standout. The Pacifica brings something of a blend of new and old-world taste descriptors to the brewers’ forum. Orange marmalade aptly describes the citrus aroma notes achieved through late addition.  Bittering quality is such that early kettle additions net a soft yet solid finish even in highly bittered beers.

I’m trying hard to find a citrus thing on the aroma.

This however is a full taste beer, with a nice mouthfeel that is delivered with a bitterness that is high-isn without being too harsh, and they’ve managed to balance this in the middle with a lovely softness.

The aftertaste or linger does appear to have an orange-ness to it, this is so much better than the rather peaky and ill judged Lahar, in my opinion.

I’ve had this on tap, many months ago, in Taupo, near the brewery, and I enjoyed it then for the lovely hop profile, it is nice to find that in the bottle it has the same sort of reaction, this is beer that I’d be happy to go the bar and order another one of.

A bitterness that is rewarding and not challenging, a refreshing crisp drink with a nice finish that isn’t intrusive. It’s good.

The pdubyah-o-meter rates this as 8 a of its things from the thing. What a roller-coaster of beers from this brewery, some clear hits, like this one, and a couple that might need some work, in my opinion, but on averages they might have hit all the points, but over a spectrum of drinkers, which might have been the plan. I like this particular beer, it’s a very good take on the style.

Once again the music was a lucky dip – Public Service Broadcasting is a London-based pseudonymous musical duo. I did enjoy this track “Spitfire”