Yankdak is brewed by Harringtons Breweries (Christchurch) in the style that is American Pale Ale and thy are in Christchurch, New Zealand 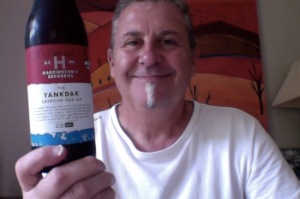 A confused look as I try to figure it out

A light golden American ale, with a fist pumping hop mix of Simcoe and Amarillo.

Our brewers hammered hop combos and remeasured malt mixes to work the APA recipe down to the essence of this great New World beer style.

A flavourful reward for the end of the day session.

So what could go wrong with that?

First a sigh, another lower ABV beer, another beer claiming “session”, another ‘Pale Ale’, it’s all getting a bit much.

I also have no idea what “Yankdak” is either. Often they are some ind of slang or clever abbreviations, this though? no idea

Citrus type aroma on opening, that’s be the Amarillo of course, I don’t get much pine though, which would be from Simcoe. (technical there !)

Golden orange colour on the pour with a small but firm head. Good size nearly fits into a standard English Pint glass. Good stuff. I don’t get an aroma in the glass though.

Slighty bitter which washes over the palate and leaves a dryish and lingering finish.

For me, and it might just be me, the lower ABV beers struggle with body, and I think that’s the case with this. On the other side though this is pleasantly bitter enough, and delivers enough taste profile to satisfy a thirst.

As it warms the other citrus, florals and malt notes begin to show, and you get a nice detectable but faint aroma as you drink. It’s not bad for contemplative drinking

Which is what I was doing.

The pdubyah-o-meter rates this as 7 a of its things from the thing. It is after all said just another ‘session beer’ that has to rely on flavour, and there are some hits and some misses. This is close,and I enjoyed it, I would though prefer something with more body, truth be told.

Note: I was provided this beer by the brewer to try and review, without catches,  this is 1 of 12 should anyone wonder about the sudden love of a brewer out of the blue.

Fresh listening is a Mark Knopfler thing. An Album called “Tracker” this is a track. It is a soundtrack to a Movie. Seems. Check in on Spotify here

I’ve was an early Dire Straits fan, then they got that awful piano  organ thing going on and went all commercial nonsense. But I’ve seen Mark Knopfler before we was famous, he was good then, he can only have got better.

Unlike some of the beers I’ve been drinking.