Extra Hoppy Red Ale which is a collaboration with Epic Beer

I have a one litre growler from the FYO station of course, it’s 6.5% ABV, 195 calories a serve, and that makes is 5.13 standard drink units in the bottle.

For the Beer Baroness this is brewed at the Steam Brewing Company  in the style this is Amber Ale or American Amber / Red Ale and it’s from New Zealand.

For her second brew, Ava Wilson has partnered up with Epic Beer’s Luke Nicholas to create an extra hoppy Red Ale. 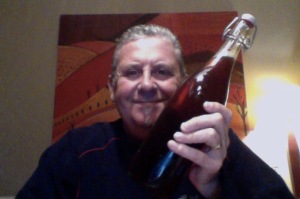 Brewed by a Lady, for the betterment of men

Nicholas being globally known for his fondness of hops has certainly flexed his muscles delivering a bold shot to the taste buds as well as the olfactory nerves.

For the 6.5 per cent ABV Extra Hoppy Red Ale, Wilson says that she has brought the “sweetness” – working with Nicholas to ensure a balance between the floral notes and alpha levels of the hop mix and the rich red malt used in the brew.

Aroma is lovely bitterness and sweetness, ’tis  thing of beauty. I thought, but then that’s when the problem started, I thought of limes.

Brown as a chestnut pour with a lovely head that is persistent and firm. ’tis a thing of beauty.Aroma is lovely, again I get limes or strong citrus.

Taste is intense florals, like Parma violet, which of course is Violets  not limes. but then you knew that.

This is really very good, lots of really loud florals up front, and a massive sweetness that carries it to a lovely nearly dry finish and a brilliant linger. Phwoar.

A beer to write poetry by.  Lovely up front, lovely middle, finish to make you want to start again and a little early hint in the linger.

Poetry then…. I could probably manage a limerick if pushed, I’m rubbish at Haiku.

Made a mistake and slopped the second serve, so ended up a half-half beer and foam. Showing off because that’s all the head I ever get. (I’ll get my coat).

This has such an intense in the glass aroma, it doesn’t translate so well to the nose when drinking, but if you were to take a sniff of the glass it’s quite pleasant.

At this point there isn’t a lot of pretence that I’m really enjoying this then, it is however slanted more towards the florals and sweets than the bitters and dryness. Which when you consider it is exactly how they’ve pitched it.

So like all poetry there comes the angst and the clouds and weights on shoulders. What I’ve got is a wonderfully lovely drinking beer that suddenly and abruptly hits the stops and tips over into the ‘that’s a bit of  a mouthful’ beer.

Too sweet, too floral, not dry enough at the back, all those things. Didn’t stop me really enjoying the way that this changed as it warmed, and I’m now thinking I could well easily go again with this tomorrow.

The pdubyah-o-meter rates this as 9 a of its things from the thing. This really is a thing of beauty and hidden talent, and you could easily lose yourself in it and become one with everything, like a hotdog.

Musical notes were provided by “The Zombies” , Here on Spotify, the Album called  Odessey and Oracle from 1967!  This is “Time of the Season”

You’d be surprised at the number of original songs they came up with, I was, and then I wondered how they’re not more well known. This was music of a generation that has become a bit more than that.

A style without definition, amber ales range from bland, vaguelly caramelly beers to products with a fairly healthy malt and hop balance. Often the differentiation between a quality amber and an American Pale is that the amber might have more dark malt character, or a less assertive hop rate