“..created by the time and the oak are incredibly tasty, complex, layered beers, perfect for enjoying with friends through the winter months. “

Brewed by Wild Beer in the style: Belgian Strong Ale and they are in the little metropolis of Shepton Mallet, England. on the other hand it could be a Saison / Farmhouse Ale.

Named after the ancient Greek goddess of beer,

Part of the Barrel Trinity 2013 series – came about after a visit to the Somerset Cider Brandy Company at Burrow Hill where Julian Temperley showed us around his amazing farm. 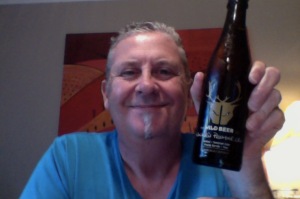 On smelling some of his used barrels we thought they would be the perfect vessel to age some of our Ninkasi in. The cider brandy flavours naturally combine beautifully with the apple flavours in the beer and the farmyard brettanomyces character in the beer has become more dominant.

This is a beer we always wanted to make and we are delighted to say, it doesn’t disappoint. Not as highly carbonated as the “normal” Ninkasi, this is softer, more mellow, with a long lingering fruit character.

Well that sounds promising and what could go wrong?

The now familiar sour aroma, like a cider but less sweet. Pour is a richer golden,    and in appearance has more body. Nice head too.

Of the three Wild Beer beers that I’ve had this is by far the most accessible and sensible. Yes it’s a sour beer, but it’s a level that is less, more mellow and a bit less edgy, more rounded. 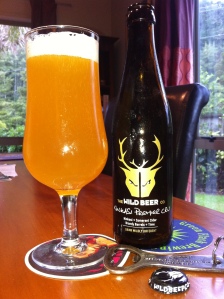 Good job I had this last then, otherwise it would have been a disaster.

The aroma has calmed down too, it’s now more oaky, unless I’ve just convinced myself of that.

A beer that is much sweeter in the front which makes the whole thing quite enjoyable and makes you appreciate that some sour beers are really worth a punt, but I imagine it really is a minefield. Actually I know it’s a minefield.

The pdubyah-o-meter rates this as 9 a of its things from the thing. As things go this is a fairly clever beer, it has layers that develop as you drink and it draws you in, all the while hiding that it’s on the stronger end of the ABV scale really, and lucky it’s in a small bottle.

Kurt Vile, there’s a name you don’t hear often enough. This is from his album called “It’s a big world out there, and I’m scared, you can of course listen here on the Spotify, or mostly all the other places no doubt.

Kurt Samuel Vile is an American singer, songwriter, multi-instrumentalist and producer. He is best known for his solo career and as a former member of indie rock band The War on Drugs

This “Feel my pain”