Yeastie Boys Her Majesty 2014. A beer that took ages to appear on the shelf, and then I’ve left it in the fridge for a while, and this completes the His/Her annual beers from YB.

Three hops: one trendy, one that used to be trendy and one that should be trendy.

For Yeastie Boys this brewed at Invercargill Brewery in the style that is: Imperial/Double IPA and they’re based inWellington, New Zealand

Her Majesty 2014 is our first foray into the murky realm of Double IPAs. Need we say more? 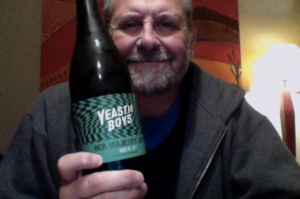 The world of Double IPA is a place where beer geeks wax lyrical over what hop varieties have been used, so we’ve kept them a secret for the first time ever.

It’s a beer that is not inspired by, but reminds us of,the Cranberries’ 5x platinum selling “Everybody Else Is Doing It, So Why Can’t We?”

Drink now or cellar for up to 18 months.

Cloudier pour of a surprisingly pale yellow beer but one that has a head of lightness and persistence.  In the glass there sees to be much more grapefruit type aroma and an earthiness. 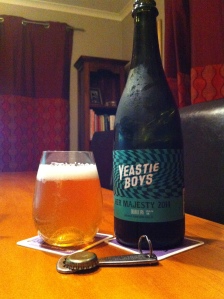 Truth be told my initial thinking is that I’m feeling a little undersold and under whelmed by this. I think that the muted flavour points ends up in a flat profile which doesn’t offer much entertainment and gives the impression that this is a beer that is ‘thin’

I’m drinking it manfully though and enjoying the sweetness that this offers, but that’s all I really can highlight.

Of course it’s possible that this particular combination of hops does not play to my palate and preference, I’m in a minority is seems that does not find this beer to be spectacular.

The pdubyah-o-meter rates this as 6 of its things from the thing, which is ‘Average’ in the arbitrary scheme of things. It pours well, looks cloudy, has aromas that are all muted, isn’t overly bitter to drink, has a lot of linger, but I found it hard work.

Am I enjoying it? Sadly no, this might be one of the very few Yeastie Boys beers that I don’t get on with.
Would I have another? Not so much, I’ll bide my time for the 2015 versions whatever they might be.
Would I share with a friend on a porch and set the world to rights? No, I’d end up concerned that that didn’t want to be my friend anymore.

Music for this is ‘Of Monsters and Men‘  a five-member, English-language indie folk-pop band from Keflavík, Iceland. This is ‘Crystals’ from their latest album ‘Beneath The Skin’ You can listen on the Spotify here