Brewed by Carlsberg Brewery in the style that is  Imperial Pils/Strong Pale Lager and they do that in Copenhagen, Denmark

Carlsberg Elephant Beer is an amber-coloured beer with big intensity in its aroma, and with a distinct maltyness. 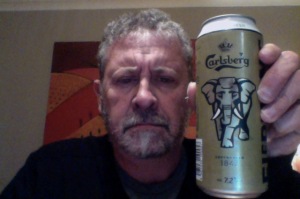 Frowning Man with the Frowning Elephant

There is notes of honey in the aroma.

The palate of Carlsberg Elephant shows a good balance between a good body from the alcohol, and a discrete sweetness which is tamed by the sophisticated bitterness of the aftertaste.

So what could possibly go wrong with that ? 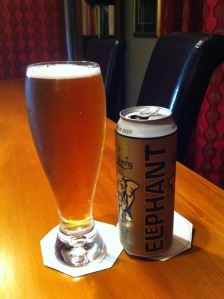 Has that hoppy harshness and is fairly sweet to drink.

Alarmingly easy to drink truth be told, and I’ve had far far worse malt and grain heavy lagers that are a bit of a train crash, I really think I could willingly have a few of these and not be worried about being shunned by the beer snobs.

Could do with dialling up the hop harness a bit to make it more of an experience, and how they hide the alcohol is clever and devious, I think that possibly after the 3rd one you might not care so much.

The pdubyah-o-meter rates this as 7 of its things from the thing. I liked it, I’m not embarrassed to say that, it was quaffable and I managed to drink it double quick time. For the price sometimes you have to go a bit bulk over substance, with this though you get a bit of substance.

Am I enjoying it? I am, it’s alarmingly good and mellow not harsh or cloying and difficult.
Would I have another? I really would and if I see them I’d buy some more.
Would I share with a friend on a porch and set the world to rights? I would because it isn’t a hard drinking beer, and would slip down easy and make the conversation all that much more interesting

Music for this, Paul Weller,  Started out with the band The Jam, Now a solo career, a new album Saturns Pattern, this is the track of that name. OF course you can listen here on the Spotify or wherever takes your fancy.

I have to say that I wasn’t enamoured of the Paul Weller effort, it’s all a bit vanilla and safe, nothing lyrically or musically that would make you go again, which is a shame because you sit here remembering ‘the Jam’ and their songs like you do the ‘Elephant Beer’ and frankly the Elephant beer wins the as I like it and remember it round.