Well now, The Shakespeare – The Bastard Red IPA. This is a bit exciting. The Shakespeare Tavern is constantly listed as a go-to venue for beer in Auckland. So I have Exciting beer, Excitable music, exciting maths and party excitement

Brewed by Shakespeare Tavern & Brewery in the style that is India Pale Ale (IPA) and they are in central Auckland, New Zealand.

So what could possibly go wrong? A brewer that waxed and waned and appears, might have,  got back on track, possibly. This is the first beer I’ve had from here for since  ages. Lets go!

More a malt aroma than anything when I open this.

Pour is a lot paler than I expected, it’s a lighter orange brown, and a lovely head!.

I was initially a bit disappointed,  having had one good IPA tonight, and reminded that the IPA style is fraught with difficulty and interpretation. This one for me has a lot of malt aroma in it, and that might not be a good thing, and the bitterness is more a sourness. 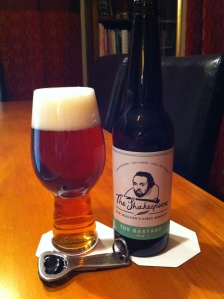 It’s supposed to be a red IPA, which confused me, I’ve had some recently and this didn’t remind me of that either.

I’m kind of ok with that high sourness note, that might be the reach for the ‘red’, but it’s a bit of a reach, there isn’t a lot of body or carry or a lot of thing going on in this that would assist you to that conclusion.

The pdubyah-o-meter rates this as 7 of its things from the thing. I’m far from convinced that this is a red IPA. I’m not a fan of the high malt aroma that this has, and it is a bit muddled in the drinking. Not a complete disaster, but not a brilliant IPA either, red or otherwise.

Am I enjoying it? Honesty box time, and it’s a no from me.
Would I have another? They have a range in bottles, I might go again, what’s what worst that could happen?
Would I share with a friend on a porch and set the world to rights? Not this one no I don’t think it has enough or carries enough for me to be brave enough. As the bard might have said ‘Swing and no ding’ on this one.

Music for this ‘ Sun Kil Moon ‘ an American folk rock act from San Francisco, California, I’m listening to the album ‘ Among The Leaves ‘ on the Spotify this video will give you an idea.