To be accurate –  Tu-Rye-Aye Midnight Rye IPA – Emerging beer, Forgotten songs, count your own beat and beat a path to the gathering.

Like the lyrics to Dexy’s famous song, rye refuses to be forgotten

From the FYO station at the local outlet, this is 1 litre of beer that is 60 IBU things, 7.5% ABV, which would be 225 calories a serve size, and the bottle is 5.92 standard drink units.

Brewed by Tuatara Brewing Company in the emerging Style of  Black IPA and they are still in Paraparaumu, New Zealand

Like the lyrics to Dexy’s famous song, rye refuses to be forgotten.

In this limited edition brew the rye grain’s spicy shrills duel exhilaratingly with the blended harmonies of fruity west coast hops, while deep dark malts plug away in the background.

The result is a complex, full, unfiltered cacophony in the concert hall of your mouth. So pour one, make a midnight run and sing just like our fathers.

This brew is unfiltered to retain all of its character and fullness.
Look: Black with a deep red hue and a light tan collar of foam
Aroma:Rich dark malt, spicy rye malt, and US citric hop aroma.

So what could possibly go wrong? Apart from bursting into song? 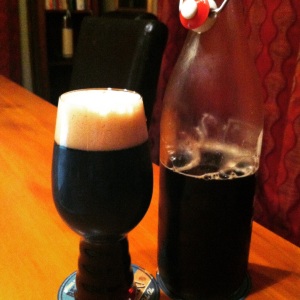 There is no escaping the hop fresh aroma as I flip that top open, quite pronounced.

Pour is fantastic, lovely white head that is persistent-ih and then stops to a fine film that I’m overly happy with.

Taste. Stand on me. This is really really nice. Dominated by the firm middle of sweet roasted malts, the slightly dry finish is long and lingering.

The aroma now seems quite lost and odd on the nose as you raise to drink, but then you get that lovely wash of light bitterness and the sweetness and the light smack of dryness.  It is a bit good.

I went back to check the ABV, and then I wondered how they hid that, this is a beer that seems on the face of it to be very easy drinking and inviting to have a few (which is lucky I have another glass( but at the level it might be best tempered by a food thing.

Is this the perfect beer then? Hardly. It is however quite the lovely thing. It is lovely and dark, it has the toasted malt thing, it has the hop bite that should be there, it has a nice dry but not arid finish, but if anything it is over sweet which leads to a lot of lip smacking as you try to shake it off, despite the other flavours calling you back in, frequently, and which is why I think that in a bar you could get a bit over-indulged.

Play was interrupted by dinner, and so this sat for a bit doing what it did. Which is get a whole lot dryer and darker on the palate, which isn’t at all a bad thing. So to the second glass, which I managed to pour as a half/half beer/head, because you know things happen.

So the second half of this is like a different beer, much hoppier, less sweet, harsher on the finish, and yet enough of that sweetness to make it still enjoyable.

The pdubyah-o-meter rates this as 8 of its things from the thing. Eight again. It’s a time for the eights. which is still on the better side of average. At the end of day the hop load catches up and frankly wears you out with its presence, which is quite loud, does a great job of deflecting attention early but is just too strong a hop based beer to get away with it for long. But all hail the beer.

Am I enjoying it? I am, it’s a journey.
Would I have another? I had a couple, I’d enjoy another, but then I really might start singing.
Would I share with a friend on a porch and set the world to rights? Actually I would turn up at yours with this, because it is one of those cross-over things and this one is fair decent and entertaining.

Music for this. Well of course it’s ‘ Dexy’s Midnight Runners ‘, but this isn’t what you might expect. They have a spectacularly good very hard to find album called ‘Don’t Stand Me Down ‘  There is a play list on Youtube here.  For me  though the brilliant  standout is the track” This is what she’s like ” invest you’re 15 minutes in this, or skip the first minute and get to the song.

Don’t Stand Me Down is the third studio album by Dexys Midnight Runners, released in September 1985.