Out and about – Speakers Corner

Speakers Corner pub, a local that has only changed slightly in many years, but it is much cleaner and crisper now. Gone are the booths and in are the high and low tables, bigger windows more light cleaner lines and a couple of flat panel TV’s 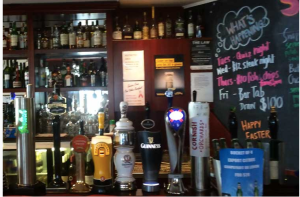 Some of the bar

I’ve been coming here for many years and they’ve always had a British influence and a large selection of British Ales, slightly less so now, but still enough to get you involved.

I hadn’t been for a while though, to be honest a newer shinier place was just up the road and so my old favourite became the old favourite.  Then I happened to chance by and what wonder is this but hand-pull pints from a keg, Engine beer.  Get in!

They have two engines, and so I’m all in:

A retired beer, Formerly brewed at Batemans in the style that is  English Strong Ale and they’re in Wainfleet, England. 6% ABV

Batemans Mocha. Slightly tart on the initial taste of a very attractive looking beer. Didn’t really have much of any aroma that I could discern except a underlying tartness.

Taste. Well it’s full in the mouth, well carbonated, slightly tart to taste, although I could pick the chocolate back that this has, which is quite soft and pleasant.

Whilst it is easy drinking it isn’t really that engaging, there isn’t a leading taste with this that might make you smile or frown or lick your lips with anticipation on what is about to follow. That said I am enjoying more as I drink it more, and that’s not the alcohol talking. I think that this has understated strength and flavours, well rounded and balanced.

It’s been a while since I had a genuine hand-pull pint and that alone is worth an extra point.

The pdubyah-o-meter recons on this being an easy 8 it is a wonderful experience, the venue too, at this time and on this day an easy 8, there is some background musics on, hardly anyone having a cheeky afternoon beer and it is really pleasant. Oddly I’m inside with my back to the sea, unlike me I know as I’d rather look out than in, but then sometimes I’m a bit unpredictable.

End result was a huge smile on the dial and a note to self to try that again.

On this visit  I had to settle for a second pint as the other beer on the Engine (hand-pull) the Staffordshire brewery Hairy Potter was off for some reason, I’m sure I’ll recover from that shock and just enjoy the beer I have in front of me.

A Short while later though I returned and it was on!

Worryingly though so was the Batemans, either slow sellers or they’ve brough a couple of barrels.

Mix of older gentlemen in the bar nursing varying amounts of beer, one rather elderly chap with his new Samsung S6.

To the beer though .

This has a much stronger caramel note, you can really pick it masking the peak of bitterness. 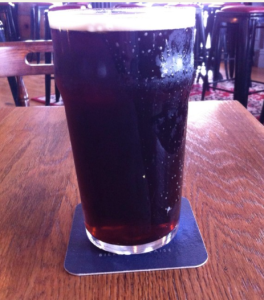 Looks fantastic in the glass, dark and rich, and it is  quite rich compared to say a Guinness I thought of fruit, probably that malt of course.

That big malt thing though doesn’t seem to help the body of this and it does not have a full mouthfeel, although I hesitate to describe it as ‘thin’ to taste.

A comfortable beer, with an unusual amount and type of sweetness, and a quite amount of hops and bitterness, but overall it is a good beer.

Felt no pain in drinking this, went down a treat.

This is pricing that is unheard of and unusual and very welcome, if I was a man of means and idle hours I’d be a much regular patron .

Check out the food, which is your stock average pub grub here

Check out some of their beers here