I’ve somewhat recently had this to drink, and didn’t really find it that exciting, but this is the BeerJerkNZ beer club beer of the week, and so once again….  Old Beer, Old Music, Old numerals, and the party got old.

Brewed by Thornbridge done in the style that is of Imperial Stout and they are in Bakewell, England 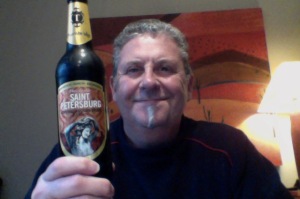 Rich and dark with smoke, subtle peatiness and the power of the dark malts. Molasses and liquorice and chocolate goodness all wrapped up in a smooth, warming liquid.

Finishes with a distinct humming bitterness carried well by the hop and malt combo.

So what could possibly go wrong? The second time around?

Aroma is mostly English beer hops, then a small waft of roasted or burnt malt or chocolate. Not a bit aroma. I remind myself then this is a ‘new’ beer and I shouldn’t rate down based on the last time I drank it.

Pour is high dark brown, not black dark, and it pours with a glorious head, which is just off white bubbles air and fluff, and persistent, no sign of it settling.

Taste. Well now this seems so much different to the last time I remember having it. There appears to be a lot more oomph in the body, although this is still a bit bitter at the finish.

Aroma in the glass didn’t change much though. 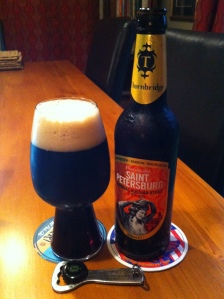 Back to the taste there is a really big presence of rich fruit at the front, it’s really full, perhaps though a little too sweet.

This burst is quite impressive but isn’t long, it’s not the whole drink, and it does fade to that somewhat uncomfortable bitter but not dry finish,

Which then leads me back circle into that thing about am I enjoying it?  I’m enjoying a lot more the things I thought were missing last time, but also not enjoying for the same things that are still there, like that sourness at the end.

The pdubyah-o-meter rates this as 8 a of its things from the thing. There is nothing wrong with this as a beer, it’s nice to drink has some great flavours and interesting notes, except for me it’s a bit like discordant jazz, it’s not quite my thing.  Clearly a fresher newer bottle and it has more sweetness about it, and smokiness in the taste, but not enough to get me over the line.

Music time meant that is was “Beirut” “March of the Zapotec” where else but on Spotify. Beirut is an American band which was originally the solo musical project of Santa Fe native Zach Condon, and later expanded into a band. They have a new album coming up and this is from that.