Or more correctly Monteiths Brewer’s Series Double Hopped IPA – a gift from MrsPdubyah. Bless. A commercial beer by any measure, this is tarted up as a brewers selection, or hand crafted, an elbow into the craft market perhaps, who am I to judge, Monteiths do make that really nice dopplebock.

Brewed by Monteiths Brewing Co. (DB Breweries) in the style we know and love as an  Imperial IPA and they do that in Greymouth, New Zealand, 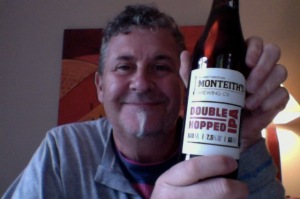 A bold IPA, with a concentrated malt flavour and sweetness.

The higher alcohol gives real warmth, which is boosted by the crisp high bitterness.

There is more that fug of an English bitter than anything else on opening, it settles to a wet oat kind of aroma.

Pour is brilliant a real head of fluff an substance, a brilliant orange beer, it looks a picture.

I really do think this is closer to an English bitter than an IPA, but when you drink it there is a sharp and pointed bitter dryness that is unexpected and possibly what steers you back to an IPA and not another style.

However it drinks ok, sort of, it can’t shake that English fug, and has a pointed bitterness that seems at odd with itself, making both interesting and challenging as a beer, which is odd.

A brewer trying to shake a commercial and trying to get a bit hipster is a good thing, but I really don’t know of any of these brewers series that have worked well, I’m sure there is a commercial over craft decision on coins that goes on, and perhaps they need to bite that bullet. Perhaps, I’m not a coins kind of person and would go substance over bulk.

This isn’t substance over bulk.

The pdubyah-o-meter rates this as 5 of its things from the thing. It isn’t unplayable, it isn’t undrinkable, but it isn’t setting benchmark or bar, and it seems a long way off the race if this is what they thunk a dIPA would taste like. Unleash the beast would be my advice as a non-financial advisor. Let loose, what could possibly go wrong?

*I made an error of judgement and tried to be kind and not cruel, I did start at a 7 – average , which I was reminded that based on everything else was over generous, It was, I was wrong, this wasn’t nice beer, wasn’t even average beer, it was poor beer.  Sorry.

Music for this : “Tami Neilsen”  ” Don’t be Afraid ”   on Spotify of course . The Neilsons was a family Canadian country music group made of 5 siblings of the Neilson family. Tami came to NZ and made it home.