As is the way a pretty thing caught my eye, this the special bottle of Pelican Imperial Pale Ale. I’ve had this before, from a tap fill, in a plastic growler. it’s not the same

I have to drink this evening a beer that is at 8% ABV, and that is of  85 IBU things (which is low end for a dIPA, but high for an IPA), this has 240 calories a serve,  and works out to be that I brought 4.1   standard drink units worth

This is brewed by Pelican Pub & Brewery in that well travelled style that is  Imperial IPA or India Pale Ale (IPA) and they are in Pacific City, Oregon USA 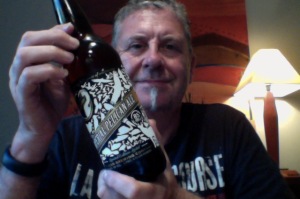 Imperial Pelican Ale is a classic Pacific Northwest IPA. We’re not exactly objective, but we consider this beer to be among the top tier of craft brews – and it’s won enough medals to prove it! Imperial Pelican is one of our first core beer styles (originally named “India Pelican Ale”) and we think of it as part of our own heritage in a bottle.

Huge Cascade hop aroma, subtle malty sweetness, and a spicy, citrusy flavor; this ale is all that a Northwest Imperial Pale Ale should be

Quite a damp straw aroma I thought on opening this.

Pour is quite hazy but delivers up a decent thick head that looks firm and persistent. In the glass there is much more strong grass hop sour aroma to be had. 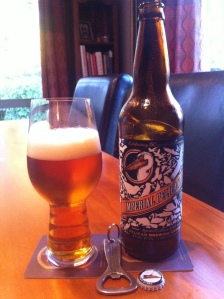 Initially I didn’t think that this was that bitter, and it has a more towards dry finish than the taste might lead on you to believe.

I paused since I appear to have quaffed a bit more than I ought to have, and that surprised me, obviously this is a beer that hits the taste buds just right and satisfies a want.

The tropical notes, such that are, are dominated by the hop roughness, but this has a decent full profile and there is lots of padding and great mouthfeel to make up for it.

Most of the ‘action’ in this though appears to be at the finish and with the linger, rather than at the front and through a middle, wherein I mean that there is nothing remarkable happening, yet this is a solid a enjoyable dIPA beer.

I really rated it the last time I had it, which was a keg version, not this one, and it was 16 months or so ago.  It is funny how taste change and how you react to beers differently at different times, and whilst I like it I don’t love it.

Don’t get me wrong though, because I’d probably be happy to sit on a few of these in an evening, there is nothing about it that says ‘step away’, and I appear have severely finished the bottle without realising quote what I’d done.

The pdubyah-o-meter rates this as a 8  of its things from the thing. Solid unremarkable easy drinking tasty in places, dry in other, with a lingering taste.

Music : ” Shearwater ” and ” Jet Plane and Oxbow ” on Spotify  Shearwater is an American indie rock band from Austin, Texas,