It screams at you “LIBERTY BREWING ALPHA LORD ‘FRESH-HOP'” It’s the end of summer and its cooler and darker in the evenings, and not so flash in the mornings. But it’s Fresh hops!

Alpha Lord was made up as he went, “a bit of this, a dollop of that”

From the fill station, beer that is 7.8% ABV, thats about 235 calories a serves size, the one litre bottle about 6.2 standard drinks

Brewed by Liberty Brewing Co  This one in the style that is  Imperial Pils/Strong Pale Lager and that happened in Auckland, New Zealand

Fresh hops are like gold to brewers because only a very small percentage of these hops are used as fresh cones to brew one-off beers. 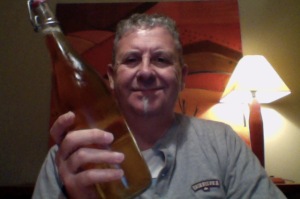 Winter haircut and everything!

Joe Wood of Liberty Brewing has been making award winning beers for many years now and his fresh-hop editions have an almost cult-like following.

This year’s fresh hop beer – Alpha Lord was made up as he went, “a bit of this, a dollop of that” and by throwing the rule book out and using his years of experience he’s turned out a highly aromatic fresh-hopped Imperial Pilsner. ‘Alpha Lord’ plays homage to NZ’s most famous export – Lorde (she was unable to make the brew day sadly).

I thought this was quite a sweet aroma on opening, and it’s lively and well carbonated.

In the glass you get a much better sense of a light fresh grass aroma, and again it is very sweet, which isn’t unpleasant. 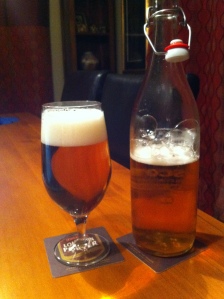 That’s fully rich, malty, strong, and has a little bite to it. In some senses I thought it was rather like a Belgian strong ale. It’s very good is what.

There is nothing dry, sharp, rasping, peaky, bitter or twisted that I can notice, except that it drinks like a strong beer, strong in taste, and that gives that impression that this is also strong in other ways, which it is, being higher in the ABV level.

But it’s very good. I might have mentioned that. I don’t know what it is but clearly a dollop of this and a bit of this and that seems to have worked out on this.

The aroma is still great and really rewarding every time, that subtle light fresh grass thing.

Then I discovered the problem with drinking in a bit of an oversized glass. You don’t get 3 goes at the bottle, you get two. This is devastating.

At the near the end though there is nothing in this that is outstanding or memorable, except that this was the nicest strong Pils, strong or otherwise, that I’ve had in a long time, it is a really nice beer of any kind, you’d be happy if yo had one, trust me.

One of those rare beers where I would go out of my way to suggest you get one, in that most unlikely of scenarios where you could or were able, this isn’t common beer, I wish it was it’d be awesome.

The pdubyah-o-meter rates this as 9 of its things from the thing. I don’t know how to break this gently but this isn’t perfect or brilliant it’s just very very good. Furiously good, aromatic, gently bitter, generously sweet, tasty in spades and so drinkable. So so drinkable.

Music for this:  ” Various Artists” got together and did  ” Acoustic Pop Covers”  on Spotify though.