It’s a BeerJerkNZ kind of night and tonight it’s potentially a cracker.  When is a Punk beer never a cracker?, not that I’ve had a lot of the BrewDog beers, honest. But I have had the Punk IPA before  and before that.

“worth it even if ends badly at some point when you wander off for a kebab and the bus home.”

Brewed by BrewDog in the style: India Pale Ale (IPA) and that happened in Ellon, Aberdeenshire, Scotland

This fresh, full flavour natural beer is our tribute to the classic IPAs of yester-year. 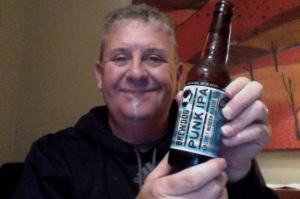 The post modern twist is the addition of amazing fruity hops giving an explosion of tropical fruit flavours and a sharp bitter finish.

A beer that spent its formative years Blitzkrieg bopping around India and the sub continent. Quintessential Empire with an anarchic twist.

God save the Queen and all who sail in her. Raising a Stiff Little Finger to IPAs that have come before and those it is yet to meet.

The aroma on opening is a burst of sweetness, and that settles to a lovely tropical Marmalade thing.

Light golden orange in the glass, and a small head that wanted to last but couldn’t put up a fight and mooched off to a film. The aroma moves to a more dank aroma, almost earthy, but with an orange tang over it. 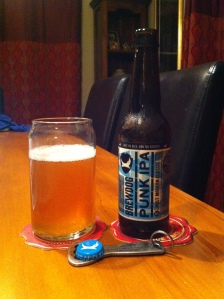 It isn’t bitter by any imagination or understanding of the word bitter, particularly of IPA.

When once this was edgy and was pushing the envelope it’s now more comfortable slippers, an aged rock star comfortable in it’s own skin.

If you’re still hankering for the days of the Sex Pistols, drunk, swearing on TV, then this will be a bit mainstream and you might even wonder what’s happened to the years.

But for en enjoyable beer, that is consistent, and allows you to enjoy aroma, and taste without it biting you back, or boring you to sleep, this is the go.

The pdubyah-o-meter rates this as 8 of its things from the thing. I think of all the version the Keg version was the best, and this bottle reminds me that you can get goodly IPA that isn’t stacked or loaded to beat you up. This plays on your tongue and is a bit of a nice easy drinking beer, but it won’t lead you astray,  but given enough on a night out it could end with you smiling and being at peace with the world.

Music for this: ‘ Elephant Revival ‘ and ‘ Petals ‘ on Spotify

Elephant Revival is a folk music group from Nederland, Colorado, formed in 2006.