BeerClub already, and into some canned stuff from the USA. Hawaii, I passed through it once time, a long time ago.   A beer that is described on a lot of categories, I hope it isn’t muddled about it all

Brewed by Maui Brewing Company in the style that is  Fruit Beer and they do that in Kihei, Maui, Hawaii  USA 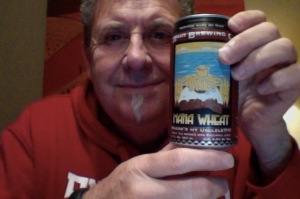 Not as much as what else went wrong today, culminating in the microphone on the last top not working which is a bit of a thing.

There is a a lot of pineapple aroma in this, not surprising since it does say on the label but that is fairly prominent and forward.

Initially I though syrupy and then it got suddenly very dry on the tongue.. Then I went again and whilst this is sweet it isn’t overly so and that pineapple thing seems to have become the tart sharp note.

I like pineapples, I eat them regularly, although mostly they’re from the Phillipines, and sometimes they’re not so good, but sometimes they are. I’m not totally sold on the pineapple thing in this is where I’m going.

Somewhat a mixed bad then, which I might have talked myself into.

It is refreshing in the sense that it delivers something other than just a hop hit, but it isn’t big on the pineapple. or as big as you might expect. You kind of associate wheat beers with a softer fuller taste, which this again doesn’t quite deliver.

Quite liked the citrus notes that this has, quite like the aroma despite it all, and it looks pretty.

But when it came to it I though that this might not have been a smart beer to try on a wet and windy late autumn night when it’s not quite warm enough.

It is a but of summer in a can though, and I can well imagine these at the beach at anotehr time.

The pdubyah-o-meter rates this as 7 of its things from the thing.Pleasant enough and different enough to be memorable as a taste I don’t know that you’d last a night on these as it’d seem too sweet and syrupy after a couple.

Music for this: I was enjoying ” Bob Dylan ” and his new Album ” Fallen Angles”  then it just got a bit depressing and desperate.

Belgian style wheat beers are very pale, opaque, with the crisp character of wheat, plus the citric refreshment of orange peel and coriander. Ingredients sometimes also include oats for smoothness, and other spices such as grains of paradise. Serve with light cheeses or mussels