Not only, but the Winter Edition.  This is the same ABV thing as their IPA, which is lovely, I wonder if they just darkened it up a bit, wouldn’t be a bad result. Much less than there not Winter version, and I wonder if that is going to be handicap.

The perfect combination of roasted malts and hops

Brewed at Good George Brewing in the style of a  Black IPA and they are in Hamilton, New Zealand

It is after all an All Black kind of night

Black IPA brewed with pale, wheat and roasted malt and a touch of rye. Hopped generously with Centennial, Columbus and Simcoe

Nothing. But I might preempt myself.  Then again I was watching the New Zealand v Wales rugby game, and a Home Nation is always the team to back, regardless. Foolish perhaps. 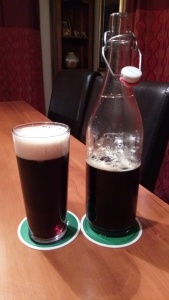 It’s a bit choppy as live diary goes but this is brilliant beer, pours like a dream, looks the business, and tastes just like awesome.

Aromatic with a raw grass hop note, but with magnificent balance from the malt bits. Coffee, chocolate are present in the aroma but not sure about his what carries to the taste.

Lovely herby type tastes in this reminds me of something. Something nice.

Not bitter at all,  just drinkable, lovely washing smoothness over the tongue delivers that section and collection of tastes. The aroma in the glass really is something nice, really lovely soft grassy hop sweetness. Chocolate Coffee all the nice things, despite that I said I couldn’t taste them earlier.

Hard to be harsh really. Nothing at all wrong with this. I just wish it was the bigger brother version.

The pdubyah-o-meter rates this as 10 of its things from the thing. It is just a bit nice. Really balanced, soft no edges drinking. Lots of aromatics on the nose and the palate to keep you in the game. Clever, very clever. Taste that is straight, aroma that is persistent and a great adjunct to the the taste, not always a part of the taste, if that makes any sense or perhaps I should say that the aroma in this is  amazing, the taste is amazing, but I didn’t quite the connect between the two, sometimes the more is more .

Music for this:  There was no music, just the poetry of sports