Seems I have yet another beer that ‘can be cellared for 10 years’, which could happen but won’t, and this really is a one off batch and therefore diminishes daily.  Perhaps I should treat it as a treasure. This is a 10 year celebration ale, and it’s also a Barleywine. It’s also, for me, beer 800. There’s something not to be proud of 🙂

Using 5 different yeast, that have been instrumental in the making of award winning beers at the brewery.

The nearly standard 500 ml bottle of beer, hand wrapped and wax dipped (I’ve seen the video) which has beer that is 10.1% ABV, which makes it 3.89 standard drink unit, and something like 303 calories a serve size. It also carries 60 IBU things. 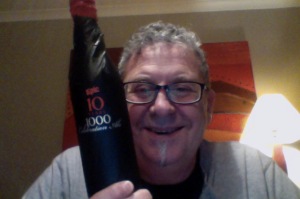 Man who needs a new hobby

This beer highlights the multi award winning relationship between Luke and Steam Brewing. Together this beer was created to celebrate 10 years of Epic and 1000 brews at Steam.

Surprisingly this beer isn’t massively hoppy. It is big and malty, in an English style Barley wine way.

This beer should age for at least 10 years. This is a one off limited batch to celebrate Steam Brewing’s 1000th Brew and Epic Brewing Companies 10th Birthday

Well a short time later, longer than the transit of venus takes, but shorter than the period when Halley’s Comment makes a reappearance, I got it opened.  The prize is in the wrapper, a poster journey, a nice touch.

A loud explosions of aroma, Sherbet sweetness, but also raisins, and chocolaty.  When it settles it is to something greener. 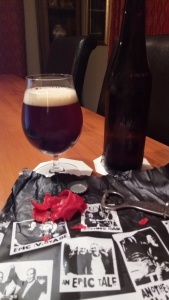 Looks lovely in the glass dark toffee apple toffee coloured with a white head that is nice to see, but would have liked to have seen it more.

The alcohol tang isn’t noticeable, which is brilliant, sometimes you can get that sourness, not from this. not just yet.

It is very sweet, sugar laden, which for me to notice must be something, I like a sweeter beer, I’ve noticed, and I am enjoying that sugary mouthfeel.

Not sure I’m enjoying the overly sweetness though. I was and of expecting fireworks, explosions and dreaminess.

But if the beer is good enough to release then it is good enough to drink right, and nothing is going to convince me to buy beer and keep it for years before I try it, I’m neither rich or that desperate, beer is a commodity not a treasure.

I noticed again how brilliant the clarity and colour of this beer has in the glass. I’ve also noticed how much I’ve drunk, scared me a bit, that sweetness will win out every time, although I can imagine that there would be some that’d find it a bit cloying.

It’s nice, but it’s not quite polished, it’s a bit light when it should be in someway a deep fuller richer mouthfeel experience, I’m sure it’ll come with age, but this ends up as a ‘short’ drink.

The pdubyah-o-meter rates this as 8 of its things from the thing. It’s not quite finished. I get where it’s going, and the plan, I think it’s brilliant work, using all the things in the past to create the beer that defines the moment.

Music for this: ” Nothing ” with an album ” Tired of Tomorrow” on Spotify

Nothing is an American rock band that formed in 2011, they’re bit Shoegaze, Indie Rock, Nosie rock. Quite the thing really.