Tuatara Tiramisu – like the desert, Coffee, Vanilla, Chocolate, what could possibly be wrong with that. It really is a bit winter like out there today, Auckland style, rain, wind, and it’s chilly too, almost time to get a jacket out.

Brewed by Tuatara Brewing Company in the style that is a  Stout and they are in Paraparaumu, New Zealand 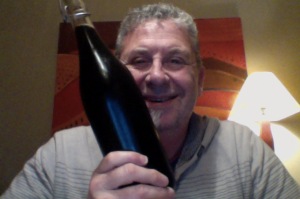 Heading into winter and replacing our Black stout series of recent years, Tiramisu Oatmeal Stout is designed around its Italian dessert namesake.

A ‘pick me up’ to get us through the winter months. For lovers of this venerable style, Tiramisu is bold, rich, warming and moreish – velvet on the palate!

That’s a lively pour with a thick looking gloop of a beer with a lovely coffee tinged head that looks like a milkshake going on.  Aroma is full burnt coffee, the green raw coffee, or that old drip raw coffee thing, that is quite nice. 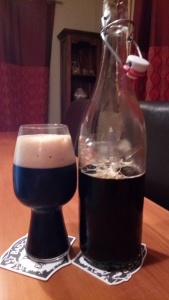 Taste is a full mouthfeel of coffee, chocolate and a sweetness that should be the vanilla, there is a big part that the oatmeal adds to this.  Mostly though its that lovely coffee rawness that grabs me.

I’ve see some comments about the bottle version having a ‘burnt’ coffee, over-roasted, perhaps, but this the keg version is just the business. The ducks nuts.

However I do like that ‘green’ coffee taste, the last you get from cold drip coffee.

You know that ultimately I’m lead to thinking this is a head to head – Tuatara Tiramisu and the Epic Epicurean – both oatmeal stouts, both excellent.

The pdubyah-o-meter rates this as 10 of its things from the thing. This is coffee forward beer that has sweetness and body that carries it.  Dark beers, stouts, can be daunting really, but this is as it is on the table, coffee, chocolate, and vanilla. I thought it was fantastic and well balanced and really drinkable. Really nice. I’m really annoyed that I didn’t get there sooner, but this is in bottles and I might go there next. But I do with trepidation as I’ve found that there is often a slip between keg and bottle. Possibly.

Music for this: ” Gregory Alan Isakov” with an album ” The Weatherman ” on Spotify

Gregory Alan Isakov is a singer-songwriter. Born in Johannesburg, South Africa, he immigrated to the United States as a child, and was raised in Philadelphia

Havee a peak at this