From that special beer 6 pack this one is the 8 Wired Brewing Palate Trip a Specialty IPA, a Sour IPA. Heaven help me. At least there is some nice music, and dinner isn’t so far away.

… Tart acidity, rather than bitterness,

Brewed by 8 Wired Brewing in the style that is  Sour/Wild Ale and they are in Warkworth, New Zealand

Two of our favourite flavours in one!

That’s a frown that is

Can we get a fruity, rich IPA, hold the bitterness and replace with a touch of sour please?

Sure, have a Palate Trip Sour IPA!

This India Pale Ale is brewed with a combination of American and New Zealand hops, but unlike most IPAs this has been soured.

The result is tart acidity, rather than bitterness, to help balance the sweet malts.

On opening you’d think this was a highly but brightly hopped IPA. Dull thud of hops. 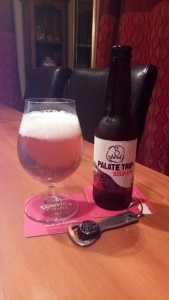 More like a fizzy fruit drink this has a lot of tropical in it, I was confused. I’m often confused.

I’m still now more convinced that sour beers need to have done their dash and quietly drift away..

The pdubyah-o-meter rates this as 5 of its things from the thing. It’s very measured, and even and doesn’t waiver, there isn’t any point where you do “oh, there’s the hops”, and it’s a bit boring and dull. Very boring and dull, and not a patch on some of the really good European sours that are hard out sour sours, but nice and clever with it. This is just ‘nice’ and that don’t cut it.

Music for this: ” Pity Sex ” and the album ” White Hot Moon” on Spotify