Oh! a Red IPA, similar to the Black IPA in that it’s a more popular style and because it’s a bit different usually they’re well received.  I could’ go past it at the fill station today. I saw red….

1 litre of the beer from the fill station , 6.3% ABV making it  5.4 Standard drinks worth, there are 70 IBU things, and this would be around the 186 calories a serve size.

Brewed by Behemoth Brewing Company this one is the style best as  Amber Ale and that happened in Auckland, New Zealand 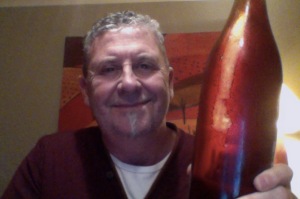 Wearing Red for a red beer.

It is rumoured that the Split Enz album Frenzy (including the song ‘I See Red’) was played on repeat whilst making this beer, however maybe the name for this beer is more straightforward.

That is a pretty decent lovely aroma of rich malts and a hint of spicy peppery bitterness.

Poured me a proper English Pint of beer, and it looked brilliant, ruby rich deep red with a lovely fluff of head that was off white. Aroma in the glass – well I still got that peppery thing that is so intriguing. 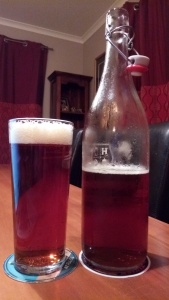 Bitter bitterness, really and it coats the tongue, and then a layer of sweetness washes over and dulls that blunt dry kick at the end. Just wow.

This is much drier n the palate than a lot of beers you get, it’s pretty obvious but it is n’t obnoxious, just apparent and present

Has dryness about it. Is very drinkable. Am happy.

I think this is one of the most up-front bitter beers I’ve had in a while, bit it doesn’t have that gentler middle about it, but it does have a nice balance about it that masks the high bitterness somewhat.

The dryer finish is also something I’ve not had in a while.  Two pints though might be a theoretical maximum, unless of course you had something to offset like the cheese and crackers, which clearly I’ve forgotten to prepare again, even though MrsPhil did get some in.

The pdubyah-o-meter rates this as 8 of its things from the thing, and I’d like to give it more if I could. I like bitter beers. I like dry beers. I like them however with other things rather than bitter dryness., you know like some tropical taste or a hit of rich malt sweetness or something. Having said that though I had no problems drinking the first pint (of the two) in easy time, which means that I’m missing a trick because I find it very drinkable. Perhaps just sweet enough, and that dryness can be addictive.

Music for this: ” Pascal Pinon” with ” Twosomness ” on Spotify

Pascal Pinon is a musical group from Reykjavík, Iceland and is composed of twin sisters Ásthildur and Jófríður Ákadóttir.

A style without definition, amber ales range from bland, vaguely caramel beers to products with a fairly healthy malt and hop balance. Often the differentiation between a quality amber and an American Pale is that the amber might have more dark malt character, or a less assertive hop rate.

American red ale brewed at a higher strength and hopped like an IPA. Typically, redder in color than an IPA, with deep ruby hues.