Harrington’s are an unusual brewer, they make a lot of beers in styles, and sometimes they make a lot of beer of one style, and they change the names of them, and they, but they’re mostly ok beers, with a couple at each end of really good and at the other meh. So to this, a collaboration beer with Fiasco Brewing, using Fresh Hops.

They were also brilliantly kind enough to send me this to try,  so I really do thank you it is much appreciated.

Fresh Hops, IPA what a mix

Brewed by Harringtons Breweries in the style of  an India Pale Ale (IPA) and they do that in Christchurch, New Zealand 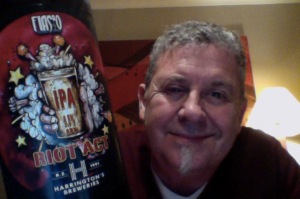 A riot of colour tonight

Brewing terminology for an accountant’s vociferous diatribe at a pair of brewers who ignore instructions and put whatever hops they wanted in their fresh hop beer at whatever cost.

This collaboration between Fiasco and Harrington’s has seen both brewers put in the naughty corner, although they’re not in the least sorry.

The brewers used more fresh NZ Cascade and Brooklyn hops than they had budgeted for, giving aromas of stonefruit, lychee and pine. They argued that touches of waxiness, spicy bitterness and malt sweetness more than made up for it but ah well; shit, sorry Phil*.We hope you enjoy this beer as much as they enjoyed being told off for it.

(*When they say ‘phil’ that’s not me, I thought I clarify that)

So, what could possibly go wrong? Nothing obvious on opening except a sugary malt burst.

Pour is lovely the head orange tinge white, big and present, fluffy and persistent. Beer is also dark and beer looking. Aroma though, I though bready yeast to be honest.

Taste is interesting, it’s slightly sour bitter but there is a lot of underlying fruitiness and a bitterness that isn’t obvious. An interesting beer this one then, it’s not like an IPA beer, and yet that is what it is most like.

There is a fullness of mouthfeel that you don’t get in beer often too. This acts though as quite a damper on tastes.  I get the sense though that this is leaving heavy on malts to give it body and boost at the real expense of letting hops do their developing and adding the flavour. Naturally I  know nothing about how hops work, or how many is enough or too many, and mostly what hops add to flavour. What I’m sure of though is that this is malt driven. Pretty sure.

That additional sweetness makes this both easier drinking and at the same time a bit heavy going.

When I weigh up what’s what I come down on a slightly negative side of enjoyment, I really do like the grassiness things that hops bring, and I really don’t sense them here, I also don’t get a lot of the other things that you might get, those tropical things, or the oiliness, and I don’t get any dryness at the finish. I think I mentioned that this is a peculiar just off mark IPA.

Which translates on the pdubyah-o-meter  as a 7 of its things from the thing. I think this is just too much malt in a beer. I like the fullness that this has in the mouth, but I really wanted more of the hop explosion that was promised and a under-delivered. This is a beer that looks great, that’s always a nice thing, and I’m sure that in a side by side test with other IPA that this would come out remarkably well because it’s a bit safe and the challenges are not of dryness or bitterness. Nice way to start an evening, and I really thank the people at Harrington’s for being true to their game and sending me some samples.

Music for this:  “Sepoy” are a band. Sounds Like: Coldplay, The Stone Roses, John Lennon. Bio: Sepoy is a four piece Indie Alternative Pop Rock ‘n’ Roll band based in New York City

Listen on the Soundcloud