Magic Rock Cannonball. A beer that rates really well on the various rating places where you go, as you do. And a new brewer to me, that’d be 212 when I update it. Also it’s IPA day, as if you need a day, and Yorkshire day. It’s a day of days.

…in the true tradition, high in alcohol and massively hopped…

Brewed by Magic Rock in the style that is  India Pale Ale (IPA) and they are in Huddersfield, England

Cannonball is an India Pale Ale in the true tradition, high in alcohol and massively hopped to survive a long sea voyage.

We don’ t want you to wait though, crack the cap and let the flavour explode on your palate. Tropically fruity, resinous hops compete against a sweet malty backbone, while a rasping bitterness builds to a mouth puckering crescendo.

The ker-chunk of the can, and a deep hop aroma, grassy as all things, and something else a bit fruity.Something.

It has a much hazier and cloudy pour as well as being paler and yellower than I expected for no reason.  Very cloudy and hazy though. Small head disappears. Aroma in the glass is nice though, fruit under a nice grassy hop zing. 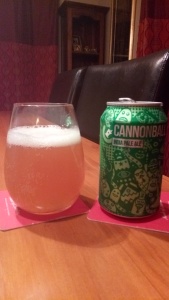 Much fruiter and much less bitter than I braced for. A lot softer and calmer, and whilst it has a dry finish it is one that sort of snuck up and made itself known. Lots of things not expected and things expected not there then.

Quaffable beer as it turns out, and despite the higher ABV you could probably go a couple with not a lot of sweat. I think though that the hop bomb that tis fruitiness in this might be the thing that wears me down, it’s nice to have entertainment in the mouth but sometimes too much is actually too much.

The tastes, the fruity part, well the dryness, lets go with grapefruit, because you know, change is good as a rest, but there is a sweeter note in there like the good old passion fruit. I ‘m having a guess that it’s the Amarillo hops that add a real fruity note.

I like this as a beer, but I’m not about to rave and wax lyrical about it, I don’t think it’s a world beater, I think it’s a bit good and a very good IPA don’t get me wrong, but there are as good local beers. Trust me I’m an enthusiastic amateur.

The pdubyah-o-meter rates this as 8 of its things from the thing. For me just too much of the fruity thing going on that I though was more distracting than adding, I did like the aroma, loved the level of dryness and was confused by the cloudy look. I’d like to try this on tap somewhere, because I think that’d be an afternoon well spent.  I like it, but perhaps not enough to chat about it.

Music for this: ” Kid Canaveral ” with ” Faulty Inner Dialogue ” on Spotify

Kid Canaveral is a Scottish alternative pop band that formed in St Andrews in Fife , Scotland, but are now based in Edinburgh, Scotland