Consume at your own risk.

Brewed by Liberty Brewing Company in the style that is of  Black IPA and that happened in Auckland, New Zealand

This beer is best described on its bottle. “Alpha Obsidian’s menacing hop heritage of Motueka 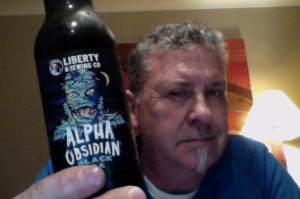 and Cascade is a corrupted blood line creating a potion of alpha acids that will shrivel your tongue, forcing acrid black tears to run down your face.”

Consume at your own risk.

So, what could possibly go wrong? I open it and that’s an enormous amount of hop grassiness

Might also have been the only person in the world that gasped as a thick black syrupy beer poured out of the bottle, focus man, focus.

It is however pitch black with a thick creamy coffee head, it is a stand out on its own merits.

Aroma in the glass is grassy hops.

This has so much dark roasted flavour, a lot, and it’s a revelation, they’ve said what they’d do and they did it.

The whole is a spectacular bit of drinking, the aroma really does not do justice to the delivery. The mouthfeel is full rich, the taste is layers of chocolate, bitterness, and an oily hop background. The finish is surprisingly polite.

I think it’s almost but not quite love. It is a beer that I don’t want to finish, for when it i gone it is gone, and I’m not one to buy a 6 pack selection to get the one jewel.

The pdubyah-o-meter rates this as 10 of its things from the thing. I just can’t not. This is startling, harsh, abrupt and yet drinkable, quaffable and inviting, welcoming and a bit exciting.  Delicious sweet smokey and very moorish, a bit of a win really.

It is however gone…..

Music for this: ” Erasure ” with ” The Innocents” Which I’m playing on a vinyl but you can listen on spotify

The first side very familiar, the second not so much, odd that.