Parachute Adams, a name that could be anything, and meaningful to a few.  (Adam is the name of the brewer, which might give it away a bit). Also The Parachute Adams is an amazing fly, if your;e into trout. I’ve just confused the issue.

They made two readily available beers, Prospector and Farmhouse, and both of them are worthy of the 10 on the pdubyah-o-meter and in the list.  The Pale ale has a lot to live up  to.

The brewer is Sparks Brewing and this is possibly brewed at Scotts Brewing Co which is  in the style that is American Pale Ale, 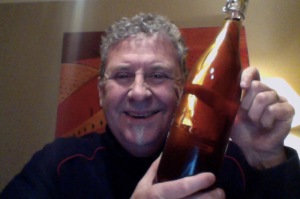 Bright Citrus and resinous hops on the nose, a balanced bitterness gives way to a light malt base of honey, baked pastry and golden syrup.

I like a beer where I learn new things, some of which are relevant, like Parachute Adams being a Trout Fly. Incidental.  As incidental about the story of how I popped a button a shirt at work this week to the amusement of the GM, but that’s how it goes sometimes.

It’s very green aroma caught me out, I wasn’t expecting that, then I have no idea most of the time. 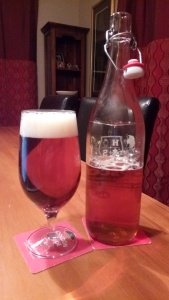 Deep brown pour with a nice head that fades to a film, still very bright and green in the glass as it was in the bottle.

A really nice bit of a pale ale beer this. Not sure what I can add. Nicely bitter, nicely balanced and enjoyable.

After some action packed beers it is somewhat disappointing and also a bit nice to have something a bit more dependable, familiar and steady as a beer.

“Not exciting”.. I’m not sure that’ll please them. This though is a solid bit of brewing. Really on the mark as a pale ale. Really.

Beer to have a few of and still have that smile and then have a few more, for me this is a proper session beer, drinkable, amiable, and just a bit nice without wearing you out, and yet still having that x factor that when you get to the bar you go “I’ll have another please”.

A nice bit of everyman everyday beer really done well to be honest. Hard working decent and enjoyable, nothing rough, edgy, finicky or panicky in there, just a properly good quaffing beer of quality.

The pdubyah-o-meter rates this as 9 of its things from the thing. I knew they couldn’t keep it up, but then I don’t know if a traditional pale ale was ever going to set the arbitrary same on fire. You can though tell quality when you have it, this has it, there are no metallic of odd tangs of metallics or that, it’s well balanced, well thought out, and well delivered.

Music for this:  ” Young the Giant ” and ” Home of the Strange”  o the Spotify

Young the Giant is an American rock band that formed in Irvine, California,