Deep Creek, the local beach bar and brewer – Deep Creek Lupulin Effect in cans one of their newer ones. Not often I get into canned beer really, makes a nice change.

Lupulin has the odour and common taste of hop 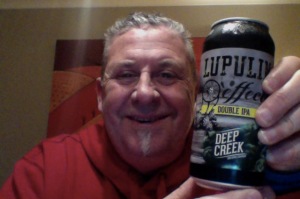 Dapper new haircut and all

Lupulin is the glandular powder separated from the strobiles of the Humulus lupulus (hops) plant.

It has sedative effects on the body and mind

Rich and malty aroma in the glass from the chestnut brown, cloudy beer that started with a glorious head that faded a bit.

This is such a nice beer, has a lovely bitterness and a really solid count of malt to really bring a full eating and big mouthfeel beer alive.

Not even a dry finish to get carried away or distracted about.

Another of those beers where the ABV count is secondary and not easy to guess at from the delivery of the flavour profile, this though a beer that will get you to your relaxed and happy place quicker than you might want to get there. Sometimes though that isn’t a bad thing. Sometimes.

I love the malt content and the character that has, I’m a fan of the sweeter fuller mouthfeel beers though, this is one of those that I’d look out for.  It’s nice to have a hop forward beer that isn’t all about blasting you in to the weeds, as it were, and this is progressive and thoughtful thing of joy.

This is a a cloudy beer, deliberately I think, and that also is marks in its favour, I’d easily go another, or two. I should also visit the brewery and see if it’s a tap beer, I’m slack like that.

The pdubyah-o-meter rates this as 10 of its things from the thing. I don’t know that I can fault it, and though it isn’t the most remarkable of Double/Imperial IPA beers I’ve ever had it has a certain presence about and ticks a few of my personal favourite boxes for taste, flavour, bitterness, and enjoyment. And it is all about me. Also I really like that it’s a cloudy beer, for no reason other than I like it.

Music for this: ” The Pineapple Thief ” with ” Your Wilderness” on Spotify

The Pineapple Thief is a progressive rock band, started by Bruce Soord in 1999 in Somerset, England