Eagle Coalface, I’ve only ever seen this in bottles, so when it’s at the fill station it’s hard to say no.

Brewed by Eagle Brewing in the style of a  Stout and they did that in Christchurch, New Zealand

At the coalface of beer drinking

All brought together with passion to create this extra dark earth shattering stout.

Aroma in the glass is just as brilliant roasted coffee chocolate malt goodness.  Black as with a coffee coloured head. MrsPhil though it was a lovely aroma, but when pushed said it smelt like beer. It’s a project I have that’s ongoing. 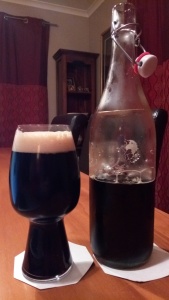 Hard to describe a mouthful of taste like that without going wow, or gosh, or whoa! Although I got was I might go with as ‘ash’ there is a lot going on there, with toasted barley malt and a a chocolate coffee layer making it all rather a bit of a carnival.

Love drinking this, but the major disappointment is that it really isn’t full bodied enough. Needed more middle more of that fulness in the mouth, more to ‘chew’ over.

It is really nice beer and I’ve got regrets at not giving this a go sooner. I’d justify why, and it’d be about labelling and names to be honest, since I rarely read a review before I buy a beer.

Second half of the pour is as gorgeous looking as the first , consistency is key. Right.

What you get though is a Stout that is  aromatic, tasty, layered, bitter, sweet and a joy to drink, coffee, chocolate and burnt notes in a an easy drinking slide over the palate. Something good really, not brilliant but good enough to make you smile and ponder a second visit.

Second visit, when my motto is “there are far too many beers to drink the same one twice”

The pdubyah-o-meter rates this as 9 of its things from the thing. Harsh. I might be hard on stouts and then it’s be a hard work to get to the 10, and that’d be based on the flavour and feel, or the excitement, depending on where and when. This is a pretty solid bit of Stout and I’d take this and share it with dark beer drinkers without a hesitation.

Music for this: ” PFarmers ” with ” Our Puram” on Spotify

Pfarmers are and experimental Supergroup. There you go then.