Part of the Flora IPA Series. Formerly Riwaka Secret, which I havn’t had before so I can’t say one way or the other if it’s going to be good or no. Lots of fans this one, and I wonder if I’m going to be one of them at the end, I’m not one to follow a crowd though.

Brewed by ParrotDog in the style that is : Imperial IPA and that happens in Wellington, New Zealand

A smooth, pale gold malt base lets this ‘mysterious’ trans-Tasman hop combination shine in all its glory.

Riwaka and Victoria Secret, used in both the boil and as dry hops.

No mistaking that belt of hoppy grass on opening, but it’s also malt sweet, also it’s very distinct aroma, and familiar and also new, I blame those hop combinations.

It’s as orange as the flower on the Kowhai tree in the glass, I don’t think I’ve seen a beer as yellow, and the head is amazing, huge and lovely but in no way noisy (I had a listen).

Aroma is interesting, I thought of liquorice, and lots of dull orange.

Wow, now that’s a mouthful of a beer. It’s immensely bitter, and powerful, and instantly leaves a dry edge around the tongue, dry as.

I don’t find this to be a rounded and smooth drinking beer, I think that some of the things are crashing around, it’s all washing around like a dervish. But it is amazing. 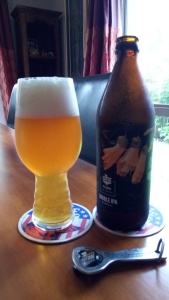 Nowhere near like at the best dIPA I’ve ever had but then again I don’t think I’ve had this hop combination before, and they delivery a lot of really nice things, Like that citrus, and the dryness of the pith at the same time, and its precariously balanced on a malt that is just about keeping up and no more.

Not a beer for the unsuspecting.

That dryness seems to have washed away, it might just have been the surprise

The pdubyah-o-meter rates this as 8 of its things from the thing. It is a thing that needs to be taken at a measured pace with a run up. I didn’t know, despite reading and writing all the words, what was coming up and it was like a slap with a wet fish, I just wasn’t ready.  Honestly as it warms up it becomes somewhat softer and the malt shows up, but it really is bitter and led by that, relentless, and that dryness, that’s still a thing.

Music for this: ” Flyying Colours” and ” Mindfulness ” on Spotify