Moa Festive IPA (Belgian Edition), a fusion of Belgian yeast and IPA styles, what’s that about?

Brewed by Moa Brewing Company in the style that is an India Pale Ale (IPA) and they do that in Marlborough, New Zealand

At 75-80 IBU, your mouth will be left comfortably numb, making it the perfect beer for the mid-winter festive season

So, What could possibly go wrong? despite the conflict over the IBU level.

Similar bready yeasty aroma as the Red Edition I had last, but to be fair this one also carries a hint of sour Belgian style yeast aroma. A hint.

Cloudy murky orange pour with a nice head that settles but is persistent and a dull white. Aroma in the glass is more towards a familiar Belgian style of things, with a sour peppery note. 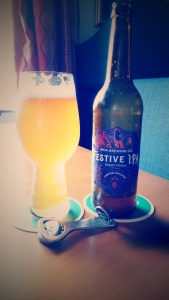 For me that’s a really clever attempt at a fusion, I get the belgium softness and I also get a much stronger bitterness and dryness, a beer of two halves almost. Intriguing and interesting.  That richness develops in the mouth as you sip this, as you do, to unravel those layers and notes of flavour.

Brings a smile this does and I actually really am enjoying what it offers, even if it really is a bit weird and unusual. Don’t know that I could go a whole lot of them though, I think I’d be happy with the one and move on, for me the Belgian effect isn’t long enough or full enough in the mouth before that traditional bitterness kicks into to touch somewhat, but as a refreshing and enjoyable drink this is a hit.

Which probably points to a reason that this isn’t a mainstream style, I think it’d be hard to get this one absolutely right.  I finished it, might have been persuaded to have another, it was quit the pleasant thing, but I stand by the idea that I couldn’t make this a go-to beer.

Oh never did figure out that IBU thing, but I’d guess it was lower than they think.

The pdubyah-o-meter rates this as 8 of its things from the thing. I like this and it’s unusual intriguing and interesting. Hard to get this nomination right I think, and this is properly good effort at it.

Music for this:  ” Rolling Stones ”  ” Blue and Lonesome” on Spotify