Wells Banana Bread beer. It’s an awful long time ago that I had this, and on checking it came up as beer #13 in the list, back when it was more ad-hoc and I hadn’t got carried away

A silky, crisp, and rich amber-colored ale with a fluffy head and strong banana note on the nose.

Brewed by Charles Wells in the style that is an English Strong Ale and that happens in Bedford, England 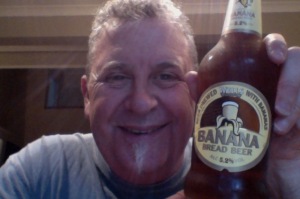 Its malty aroma is complemented by the gentle nose of Banana. Its flavour unfolds with a sensual sparkle and a smart crispness, which balances its aroma perfectly.

Tropically fruity; its ripe banana flavour, emphasised by a hint of bitterness, comes from the addition of real fair trade bananas and finishes with an emphatic, steely dryness.

Banana is strong in this, but it’s more candy banana than anything natural, like those banana lollies you get, or banana nequik powder just add milk make a milkshake mix.

Put is a lovely brown rich hazelnut colour but with a very little head of no substance but persistence. Definite banana aroma in the glass.

An there is a lot of banana taste in this, all over it like a cheap suit. Makes a beer that is quite sweet really. The bitterness is nice and supports well, with just about the right amount of carbonation.

I like it more than I remember liking it all those beers ago.

But I can’t go past that although this is banana as advertised it’s a beer that’s hard to take seriously, despite it being quite popular apparently. I like a sweet beer, but this is even a bit too much for me and if you close your eyes it’s hard to actual pick that you’re drinking a beer and not a weird fizzy milkshake concoction

The pdubyah-o-meter rates this as 7 of its things from the thing. And despite all the weirdness and oddity and one sided thing that this beer has it’s still not a bad beer, to have the once, I can’t imagine rocking up with a half dozen of these or setting up for a few with a mate. But hey you mike like banana that much, there’s probably a web site for it.

Music for this:  ” Lady Gaga ” has a new album ” Joanne ” which I have on spotify

Joanne is the fifth studio album recorded by American singer Lady Gaga. It was released on October 21, 2016