This is the Moa – Tripel Savvy 2016 vintage, a right proper treat in among other treats in the fridge, and I genuinely have been looking forward to this.

a more in your face fusion

This is beer that is 9.3% ABV in a 375 full fancy bottle, cork and cage and all that, which makes about 279 calories a serve size, and about 2.8 standard drinks worth

This is Brewed at  Moa Brewing Company in the style that is of an Abbey Tripel in Marlborough, New Zealand 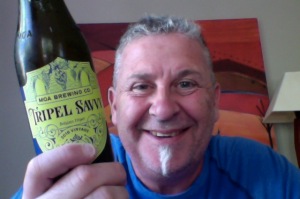 An experimental Belgian style Tripel where the candi sugar adjunct was replaced with unfermented Sauvignon Blanc grape juice from the 2016 Marlborough harvest.

This year sees a greater addition of Sauvignon Blanc juice for a more in your face fusion. A quintessential Tripel invoking banana and spice derived characters, complemented by the vinous yet fruity and tropical notes.

So, What could possibly go wrong? I’ve had an earlier version of this beer, and it was good. so more of the same would be a bit good.

Aroma on opening, as it did with a strong hiss, is very much like a beer. I really was expecting a bit more tannin aroma thing.

Also on pouring I thought this would have been red.. Dur. It’s a golden hazy yellow with a light full of small head in start white.  I’d have to say to a lovely looking beer.

Aroma on the glass is pleasant and towards a sweeter note, sugary almost.

And that’s rather good, soft initially with then a wash of higher bitterness and a tart note at the end and a soft finish that seems almost luxurious.

This is jolly nice beer, and  I’d have to say a very clever ploy to make it smaller and special and you then take more time to sip and enjoy what might otherwise be a daunting task, not that I’ve ever backed down on a challenge.

I really am enjoying that sweetness and the lovely way the wine like sourness follows. It’s a good Abbey Tripel with a rather nice crank on the dial adding to the style rather than making a new variant. I like it. Then again I like the Abbey Tripel and I enjoy a Sav now and again.

The worst thing I have to say about this beer is that I should have kept it longer perhaps, I wonder if it gets more complex and deeper? One of the imponderables I guess.

The pdubyah-o-meter rates this as 9 of its things from the thing. Superb bit of Abbey Tripel with a lovely addition of Wine grape and aroma in there for balance and boost, more boost than balance. I can however imagine that this would be a divisive beer, beer drinkers might not like and I don’t think a wine drinker would appreciate it. But their loss.

Music for this:  ” Sundara Karma ”  ” Youth Is Only Ever Fun In Retrospect ” on Spotify

Like other abbey ales, Tripels are strong, yeasty-malty beers. But they are also pale, and have a notable hop profile. Hop bitterness may be higher than a typical abbey ale, up to 35IBUs. But the finish is where the hops really shine, as tripels should finish fairly dry. Otherwise, maltiness is still essential to the style, and the assertive yeast note typical of all abbey ales will be more apparent in tripels, since they do not have the rich dark malts to distract the palate. Alcohol flavours feature more prominently in Tripels that in just about any other style