Arrived very late in the year  the Yeastie Boys Her Majesty – the 2016 version. I’m going ladies first, because it’s polite and because to be honest I’ve already had some of the His Majesty tap.

Brewed by Yeastie Boys this is in the style that is  English Strong Ale and they do all that in Wellington, New Zealand

old boy with a Yeastie Boy

The second of two results from a Yeastie Boys’ shareholder blending sessions in September 2016.

Pour is a black as pitch thing with a giant head of brown/white that looks a bit like a milkshake. Aroma in the glass has something like ash about it, and an underlying richness. 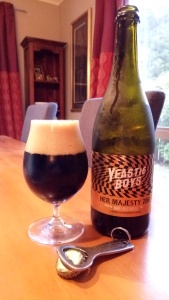 Taste is interesting. First it feels very full and rich, then it washes away to something bitter and lingering. I know this is barrel aged and that also might explain the sense of the woodiness in this.

I poured a second glass, it’s as lively and full of head as the first, it’s an excitable beer.

As it warmed up It regained some more body and filled out a little in the bottom part, which was welcome.

It is though a beer that you don’t quaff, and that you wrestle with a bit, It carries that ‘strong’ label into some of the tastes, and it struggles to maintain  balance. It’s nice beer in an unusual style for all that, and it might be that that brings the awkwardness in really enjoying it. There are however more up things than down things, and I had no real problems finishing it off with a smile on the old dial.

The pdubyah-o-meter rates this as 8 of its things from the thing. It is far from perfect, and there are some jarring things in this that make a beer that is perhaps just out of  balance . I wonder to myself if it’d age and mellow up more, but I think that the underlying notes that this carries might win the day.

Music for this:  ”Next Stop: Horizon” and ” The Grand Still” on Spotify