Mythica Brewing. There’s two choices, I made one – Mythica Incubus  I might make the other if it tempts me.

with a spicy finish

This is a 500ml bottle of a beer, nicely full bottle wrapped too, 7% ABV, so about 2.3 standard drink units

Brewed for the the Mythica Brewing  people in Silverdale, north of Auckland an India Pale Ale (IPA) (red) style. If you know a brewer in  Silverdale you’ll know the brewer for this, said Columbo, and he likes to make good beer goodly. 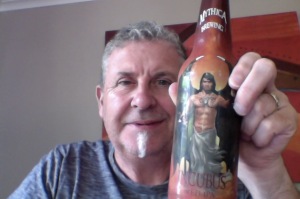 not a self portrait clearly

INCUBUS  (Sp. Humulus)
A demon or evil spirit originating from medieval legend that descends upon sleeping persons, usually taking on the form of a male to seduce females. Incubus humulus is a species that uses magically infused hop beverages to attract its favourite prey – IPA drinkers

Dazzlingly good bottle art on this.

Caught out by the total explosion of hops from this, brilliant! Rich sugary too.

Darker rich red brown with a lovely full foam head, a lovely looking beer in the glass as well as in the bottle.

Hoppy aroma in the glass, but there’s something else there too, something like green wood.

That’s a bitterness that was larger than I thought, and there is an enormous amount of software malt sugar thing going on that cushions and balances this, finish is dryish but not arid and it’s lingering and aftertaste is strong in this.

Alarmingly easy to drink this is a beer that ticks off a lot of the right boxes in what you might look for in a beer, I think it’s downfall is that there isn’t quite enough length in drinking this and it’s all a bit short in a journey, there’s nothing else to develop or taste, it is what it is.

The pdubyah-o-meter rates this as 8 of its things from the thing. Aroma, taste, looks, and overall dry enjoyable, not sure about the whole journey of tastes though

from Denmark a bit of Alternative/Indie/Pop/Rock