Harrington’s Old Spice – a Spiced Ale as part of their 25 celebration. They’ve sent me this beer to try, and as usual I thank them and appreciate it.

Brewed by Harringtons Breweries I’m picking it as in the style of a  Spice/Herb/Vegetable an they’re based in Christchurch, New Zealand

A man familiar with Old Spice

Last year Creyer Malt  brewed this beer with Harrington’s Breweries to celebrate 25 years in the industry for both of them.

Part of the proceeds of sale of this are being donated to the City Mission, buy it if only for that.

That seems like a lot, and I mean a lot, of chocolate, like a thick hot chocolate pudding aroma, and then a catch of something sharper. Lovely.

Pour is quite flat but I can see that t’s very well carbonated, you could mistake this for looking like a glass of cola.

In the glass it loses that chocolate punch. 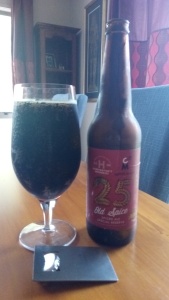 Taste. Well that’s interesting. It’s quite full and creamy, with various spice things dancing away in there, and despite looking well carbonated this isn’t in play.

Allspice, ginger are the things I get the most from this, and that’s not a bad thing, but this isn’t a deep of heavy thinking beer, it’s not complex or chewy, stodgy, boozy or challenging.

It is though a lovely refreshing spiced beer that I found easy to drink and finished quite quickly.

For me it could do with more body, as always, and I might have enjoyed a head on my beer, it is a celebration after all.

To make sure I enjoyed it I drank the second one too 🙂 Cheers Harrington’s  and Creyer Malt  and 25 more years of this and you’ll be proper legends.

The pdubyah-o-meter rates this as 7 of its things from the thing. It’s a very good 7, this has lovely aroma, and nice set of flavours that refresh and entertain bit it lacks a bit of depth and body.

Music for this:  ” Pigeon Detectives” and ” Broken Glances” on Spotify

Leeds’ very own The Pigeon Detectives return with fifth album ‘Broken Glances’, unlike anything you’ve heard from them previously.

Any ale or lager made with herbs, spices or vegetables. The additive should be distinctive in the aroma. See beer description for flavor. Body, color, hop character and strength vary depending on the type of spice, herb or vegetable used.