Turns out it’s It’s Ali Boma ye, so I was a bit wrong, but we all learnt something.

This was the beer that was going to rescue the afternoon, and Mark was wondering if that last beer was underdone or off, I have no idea, I thought it was me, but he’s a voice of reason, and he said I could have another 🙂 He’s a good man is Mark and you should read him and his books plus I’ve often cribbed from his music liked like today

This is a beer that us 16% ABV and a large 480 calories a serve size in this 500ml bottle, also it’s worth about 6.3 standard drink units. Lucky I’m only driving a laptop this afternoon.

Brewed by 8 Wired Brewing in the style that is of an Imperial Stout and that’s just North of Auckland in Warkworth, New Zealand 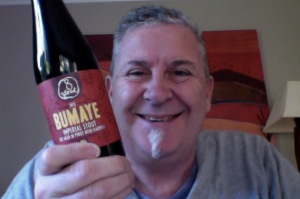 Sometimes – OK, rather often, actually – I find myself asking, “How far can we take it?” Keeping in mind that flavour should be the main objective at all times, the conception of Bumaye was one of those moments.

To make it we started out with the baddest imperial stout we have ever brewed, and then added loads of tasty sugars to the fermenter for extra flavour. To smooth out the roughness, we allowed the beer to mellow in Pinot Noir barrels for 3 and a half years.  – Let’s rumble!

Chocolate rich red wine tannin aroma on opening, what a party for the nose!

Pour is dark cold pitch black, which even with a good effort at making it have a head failed. It sits dark and brooding the the glass, obsidian.

That’s such a deep aroma or that red wine in this in the glass that it nearly catches at the back of the nose.

I read something on this recently that referenced ‘umami’ as one of the things, I scoffed derisively. I shouldn’t have, this really does have what you could describe as a strongly in place and appropriate savoury taste.

This is full in the body, with that red-wine infusion bringing a familiar wine-like level of tang. The finish on the tongue is lovely, light bounce and then a real lingering full mouth sensation.

This is wonderful beer that gets better as it warms, fills out, mellows and lets loose a pack of aromas that all you with a deep sense of joy and wonderment. Which is surprising because it’s easy drinking beer without a hint of the boozy or sharpness from a high alcohol level.

The tastes too level out, level up even, and give you a full flavour experience and flavours without challenging or pushing you around, this is just nice beer. Properly nice.

The pdubyah-o-meter rates this as 10 of its things from the thing. I grew into this,, which is only a short journey, it’s packed full of aroma, looks lovely, if a little flat and dull, but unfolds like a butterfly from a chrysalis, gains wings and soars a bit. The caveat being that this is at the big end of the ABV scale and I could be waxing lyrical*

*I’m not this is chuffing good beer that beer lovers and a red wine buff should enjoy equally, that or one of them is telling fibs.

Music for this:  ” The National ” and ” High Violet” on Vinyl and Spotify

High Violet is the fifth studio album by The National, which was released on May 10, 2010

There are some great well crafted tracks, this one that I particularly like, but it’s chock of good listening. Also I don’t understand why “Vanderlyle Crybaby Geeks” seems to be a fan favourite, but then again you can’t like every music.