Deep Creek – Lupulin Effect – Wunderbier German IPA. A lovely beer based on that I’ve had it out and about, more than one, and this one is in the Beer Jerk Beer Club beer case. So I’m all in because it is lovely.

As most people will know

Brewed by Deep Creek Brewing Co this one is in the style that is an India Pale Ale (IPA) and they brew locally to me in Browns Bay and further North in SIlverdale, Auckland, New Zealand

As most people will know, Germans love their beer.

And they make some pretty darn good ones.

We found some tasty NZ new experimental German hops and made an IPA with them to showcase what Ze Germans can do!

Has to tell from the small opening in the can about what’s what, but there is that dull dank hopiness if you’re patient.

It’s a glorious yellow orange pour with a really well formed head that settles to a formed head and sits nicely.  I the glass it smells sticky, orange mandarin/tangerine (wonder where that came from). 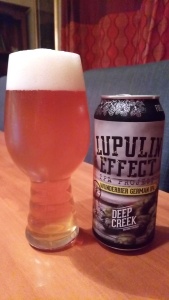 I know how good this tastes and the mouth is watering, This isn’t at a like most of the beers I drink, which is by and large for the first time, this is a repeat, but the first time in the can.

It’s really good, the bitterness is sharp and tangy, the softness in the middle is lovely and finish is tart and slightly dry on the tongue, the lingering taste is sour like orange pith.

This has an uncommon sickness about it, which is quite nice, unusual.

I’m not totally sure that it’s better in the can, I think that I prefer this from the tap, for no real reason that I can discern, but it is lovely in the can, and really continues in a wonderful series of the Lupulin beers.

I’ve enjoyed this from the start to the end of can without any fuss, and I’d easily and willingly go another, which reminds me to pop to the beach and take a visit to see what’s on the taps.

The pdubyah-o-meter rates this as 8 of its things from the thing. This is very good beer, the Lupulin series has been consistently high bar and enjoyable, and this is a beer that cements that in place, lovely aroma, lovely looking and bitter without being squint eyed about it, and has taste that you can enjoy. I said, enjoying it.