Boneface Hoptron APA. Another in the recently available in Auckland beers from a new brewer. They’ve been pretty good so far, polished and easy to enjoy. This one is quite popular and so I’m keen to try it, as I am with most beers.

followed by a hit of fruity

Brewed by Boneface Brewing This one is in the style that is an American Pale Ale and the are in Wellington, New Zealand 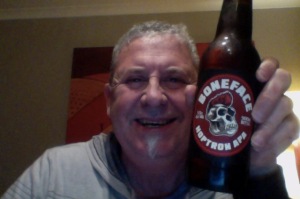 Getting my hop on

This American Pale Ale is the perfect balance of hops and malt, with rich caramel malts that are dominant on the palate followed by a hit of fruity dank hop flavour, and balanced bitterness

Goodness that aroma fair burst out of the bottle like a cat out of a bag!  Green dank hoppy greenness.

Pour is a lot paler than I thought, it’s at the  lighter end of golden brown, nice looking colour really.

Aroma in the glass is the same hoppy grassy lovely. 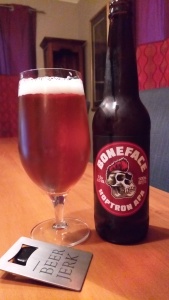 Not a long wrong with that really. The bitterness is tall and sharp at the front, but there is a long malt middle that cushions to a lovely green hinted dryness.

The bitterness is quite sharp, short and peaky. I find myself though, again, wanting more of that fullness in the middle of this, because this could do with more punch there.

I moan though, because what there is, is perfectly at ease with itself, the malt is enough to make to comfortable in the mouth, and moorish too, there’s that weird sense that you have to quaff this as the flavours really set something alight.

Doesn’t mean that you can slow down and enjoy this in normal drinking time, because you can, and when I realised that I slowed and enjoyed it all again.

The more I have of this the more I realise that this would be a brilliant to have at a pub beer, it’s beery enough, tasty enough, without making you look like some needy beer snob, when really you’d be giggling as you were actually showing off and having your own good time.

The pdubyah-o-meter rates this as 8 of its things from the thing. This is nice drinking, Easy drinking, offering some sharp bitterness and softness in the mouth that carries you along with it.

Mary Beth Patterson, known by her stage name Beth Ditto, is an American singer-songwriter, most notable for her work with the indie rock band Gossip and whose voice has been compared to Etta James, Janis Joplin and Tina Turner