Nomad Granite, the beer of the week for the Beer Jerk beer club. And again I’m late to the party with this one,  because club night is Thursday, this week they challenge us with a beer that contains, of all things, Pomegranate. You build an immunity to the craziness off things added to beers, just for the sake of adding them I don’t think I’d be buying this beer and it is only because it is a club beer that I have it. I just paid for it in a different way.

Brewed by Nomad Brewing Company this one is in the style of Fruit Beer and yes I know it says Pale Ale, Nomad  are based in in Brookvale, Australia 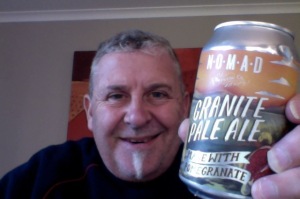 I don’t think this is a winter ale

Named after the granite hills of Mudgee where we sourced the pomegranate for this tropical brew.

With it’s origins in Persia we were keen to use this locally grown exotic fruit to complement the fruit salad hop aromas to give a lovely tropical pale ale.

To be honest on opening that smells like a pale ale, mildly hoppy.

In the glass, it’s a pale pale yellow, and takes on a pepper like note as an aroma.

Aroma give nothing away as to the contents.

Taste has a sweet fruit like note or hint in the there, but it’s overshadowed by the bitterness that this beer has.

Then the aroma developed a metallic like thing, which I’ve had before and I’m pretty sure is hop related, but I’m not an expert.

It’s a nice idea, but I don’t think that they’ve thought it through, for me there is a clash between the hop profile and the sweetness that the fruit wants to bring, and the hop profile is not the right one for this combination.

The pdubyah-o-meter rates this as 6 of its things from the thing. It’s not something that I’m going to tell my friends about, I found it peculiar in the aroma, and confused in the palate of tastes.

Music for this:  ” Grace Jones ” with ” Living My Life” on Spotify of if you’re like me, on Original Vinyl.

Living My Life is the sixth studio album by Grace Jones, released in 1982. It was the last of three albums she recorded at the Compass Point Studios in the Bahamas.