Emerson’s Brewer’s Reserve A Beer Called Gary. A beer. Called Gary. What a hoot! Imagine drinking that much of the product they made a beer for you. Easier to change your name to Bud if you ask me 🙂

leaves quite an impression

This on is brewed by Emerson’s Brewing Company (Lion Breweries – NZ) in the style that is an: India Pale Ale (IPA) and they’re in Dunedin, New Zealand.

Named for a long serving, loyal Emerson’s drinker, A Beer Called Gary is a New Zealand hopped pale ale, with a bit of a kick! 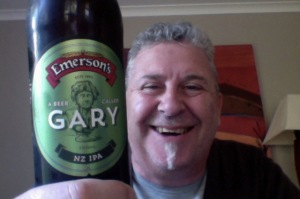 Every 25 years or so, we name a beer after a loyal customer. Congratulations Gary, you deserve it. Your dedication to the cause has been quite something.

We know how much you love a hoppy IPA… and this one is bursting with Nelson Sauvin, Moutere and NZ Cascade hops. It leaves quite an impression, much like yourself. We look forward to our next lucky winner in 2042

It comes with it’s own instructions on how to best enjoy it.  Which made me smile, it is notoriously cold in Dunedin, being so much closer to the Antarctic ice, then again I’m easily made happy.

That’s hoppy on opening. And Malty sweet too. Fruity as well I’ll be bound.

Orange golden colour on the pour with a small but brilliant white head that seems full of itself and firm and steady.

It has a lovely aroma of Green hops, Malt and a promise of fruits, but its very bitter and harsh when you drink it, and it’s a clatter all over the place. The hops dominate what should be a more balanced beer based on th promise of the aroma.

Whilst it gets more approachable as it warms up this is quite a full on large beer for a customer appreciation beer, I’d have to have an Emerson’s Bookbinder again, which was the beer that Gary turned to in great quantity it would seem, to get an idea of where this beer gets the backstory from to remind myself. Bookbinder is a ‘session’ beer though of about half the ABV that ‘Gary’ has at 3.7%

As it it though, it’s not a beer that you’re going to sit and drink a large amount quickly of, and each mouthful takes time and has it’s own challenges.

Having said that, as it warms it does calm down a bit, but I think it’s a beer that needs something to go with it, an ideal beer for food, if you’re that way inclined.

What is nice though is that having been brought by ‘big beer’ Emerson’s seem to be adept at their knitting and processing good quality beer, and that is something that should be recognised and appreciated more widely.

The pdubyah-o-meter rates this as 8 of its things from the thing. It’s a nice beer, it’s a hop bitter forward beer that eventually lets the warmer malts have a crack at adding to the pleasure, but it’s a little and it’s late, and for me this is just too much to one end of the bitter scale to recover to be a beer that I think would be much nicer. Anyway cheers Gary, you’re the man!

Music for this:  Wonderful Wonderful by The Killers on the Spotify