The Aardvark, which is all intriguing, isn’t it.  Not the prettiest of animals. Then you read the blurb “Flavoured with Lemongrass Ants” and then I’m thinking what could possibly go wrong! and I found the perfect album.

unlike any you’ve tried before

Brewed by Garage Project in the style this is a  Sour/Wild Ale and the are in Wellington, New Zealand

Consider the Aardvark (Orycteropus afer), a specimen whose visage seems to defy the very laws of nature and whose insatiable appetite for ants is legendary.

Contained within this bottle is beer unlike any you’ve tried before.

Flavoured with Lemongrass Ants the result is a startling citrus sour, to our knowledge unique in the world of brewing.

Truly a treat for the brave soul with an enquiring mind and curious nature. 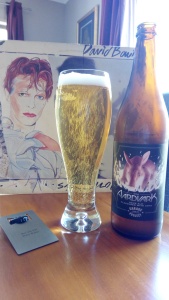 On opening you get that Sour aroma, but this one seems to have an edge of something, unless I’m in full panic.

It’s really clean and clear, a pale yellow that pours without much of a head. It’s got a lot more of a Pilsener aroma about it in the glass

This is one of those intensely dry and sherbet like sour beers.

Sharp and intense burying everything underneath it, except for a lemony tang at the end there.

Just another sour beer for me, and one that ends up not on the right side of the ‘Do I like Sour Beers’ question. I don’t like the dry sherbet sourness.

The pdubyah-o-meter rates this as 7 of its things from the thing. It’s not my thing, this version of a sour beer, and it’s one that goes on the no side of the ledger. An interesting path to a sour beer, using ants that is, they’ve got great idea and some decent researchers to get to this. Glad I had it, disappointed it wasn’t nearer my taste.

Music for this:  It is a sunday, a Vinyl Sunday, and I’ve got Scary Monsters by David Bowie  on the Spotify player if you want to sing along.