Alibi Brewing Company. A new brewer in an unlikely venue, on Waiheke island, where they’re a winery, brewery, restaurant. I’ve heard good things about their beers. Lucky fo me then that they brewer contacted me and offered me a couple of freshly canned brews. Naturally  I said yes. 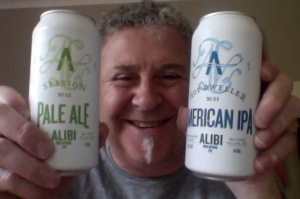 No Alibi needed to have a good time

First :  Alibi Pale Ale, which is in the style that is an  American Pale AleA full bodied lower alcohol beer made using a mix of continental and local malts, finished with a large dose of New Zealand aromatic hops in the kettle and whole cone flowers in the hop back. 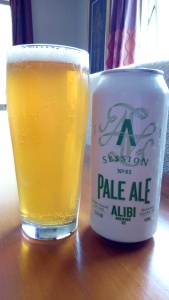 The Pale Ale. A lovely full hop bite aroma when you crack that can. Magnificent golden summer orange, with a lovely head that looked more promising that it’s staying power, settled to a light film. Aroma that strong fresh hop.

Dry finish from a surprisingly bitter beer. Lovely light drinking beer that is punching above it’s ABV weight, and what it lacks in body lunch it takes up with taste and a deep dryness that would not be amiss on a fuller strength beer.. Deserves a wider audience and should be a summer supper.

The pdubyah-o-meter rates this as a strong 8, which is very good on the scale of things. A properly nice session beer with many strong points. 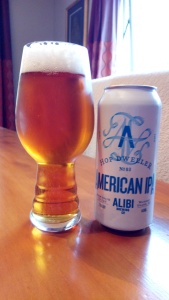 The IPA Change of beer, change of music, a band with cover songs.and a  change of glass, it’s all happening!

Malty sweet hoppy aroma on opening this one. Orange golden pour with a monster head that just too fluffy and light to support itself. It is fairly noisy when you listen to it.  It has a caramel matly hop aroma in the glass.

There’s a bit of a battle going on here between that malt sweetness and the intensity that the hops have, which results in a bit of an uneasy clash. The Bitterness is a flat plateau on this, a ceiling, and that does nut turn to a dryness at the finish. There is an underlying sense of a fruit in this, soft citrus but for me it struggling to be a voice heard.

I’m then a bit unsure about this, it’s alarmingly easy drinking, so it’s not difficult, the caramel body part really is carrying a load in this, I’d like to have some more bitterness perhaps, stronger in some way. The nose that you get as you drink though saves this a lot, it’s really enjoyable.

The pdubyah-o-meter rates this as 7 of its things from the thing. It’s closer to 8 than 7, but I don’t think I can put my finger on what it is about this that’s not working for me, looking at the rapidly emptying glass I’m going to be struggling to come up with something.  It is an easy drinking, easy to enjoy aromatic and tasty beer, even if I was searching for what that taste was and why it kept moving about. I think that this one errs to far towards the malt from the hop balance for me.  I wonder if there’d ever be a fresh hop version because that might be a thing.

Music for this:  ”Who Built The Moon? by Noel Gallagher’s High Flying Birds on the Spotify

Creedence by A-Sides Club on the Spotify