Shepherd Neame Double Stout. England v Tonga on the TV, I have nothing to lose except my dignity. Perhaps.

Brewed by Shepherd Neame This one is in the style that is a Stout  and that happens in Faversham, England 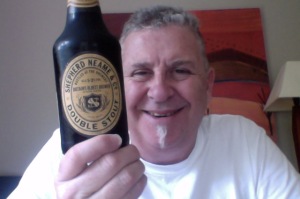 This magnificent example of a classic double stout delivers a velvety-smooth palate of dry, burnt flavours – complemented by roast, cocoa and coffee notes.

Black, creamy and delicious; it is a Shepherd Neame masterpiece.

Well what kind of beer is this is the first question, Double/Dry/Sweet, I’m going with plain old Stout, saves confusion.

Chocolate rich aroma on opening, as it did with a soft hiss, Pour is more a dark brown beer than black, the head it leaves is fantastic, full firm and tinged chocolate.

Aroma mostly that chocolate note, sensing a theme going on. 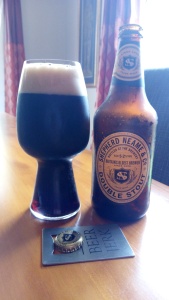 Oddly light in mouthfeel, thin almost, this is a nicely bitter beer with a large nose of chocolate and roasted malt, that doesn’t translate exactly to the taste in the glass.

It’s almost over carbonated the bubbles taking away rather than adding the feel and texture that this has, highlighting the bitterness and not the softness.

It is ok for a middle of the road stout, I don’t think that it could win medals for style or interpretation,

As it warms a dryer finish appears, which is a pleasantly nice addition.

The pdubyah-o-meter rates this as 7 of its things from the thing. It just isn’t big enough or full enough to be in the next tier, and although nic in the style it doesn’t set itself aside or apart and lives in the peloton and not in the breakaway group.

Music for this:  ”Low in High School by Morrissey on the Spotify