Beer – The Box of Duncan’s – Part the Second

The continuing enjoyment of the Duncan’s Polymorphic Mix 6 pack that I was gifted as a present.

Not surprisingly this is beer that is brewed by Duncan’s Brewing Co. who are in Paraparaumu, New Zealand

Today I’m having a pair of beers that I’m familiar with, and have had before.

I’m starting with : Duncan’s Pilsner a beer not surprisingly in the style that is a  Pilsener 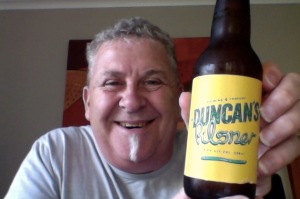 A New Zealand take on an old world classic.

A crisp, dry lager, nicely hopped with floral notes of citrus and spice.

Looking magnificent a pale pale yellow pour with plenty of carbonation and a good finger of a firm white head.

There’s a real grass note in this, and there is an abrupt and jolting dryness, no gap just wham!

The aroma has a lot of that grassiness about it too.

So this is a step up on a standard everyman/euro lager in three things, aroma, taste and finish, which is what you’d expect from a premium craft beer.

Is this the craft Pilsener that you’ve been looking for, or indeed if Pilsener is your thing would this be your thing?

For me that grassiness is too ‘fresh’ or ‘Raw’ and too short, an that dryness would creep up and exhaust me if I had to drink more than a couple of these.

So whilst it is nice, and perhaps good, it isn’t a beer that I could go out of my way for, and sadly this still isn’t for me.

The pdubyah-o-meter rates this as 7 of its things from the thing. Given a re-work this would probably make the backbone of a brilliant IPL, but I don’t think that I’m really a pilsener guy at heart.

This particular 330ml bottle has beer that is 4.7% ABV which is around that 141 calories a serve size, there are 20 IBU in this too, and this is a 1.2 standard drinks in NZ

I’ve had this beer a few times, the Beer Jerk people sent me on, and as I’ve said before they’re pretty discerning.

So not the first time I’ve had this, and although I ‘get’ it, and this seems now to be a brewers staple I’m unsure that this really sets any bar or measure. Yum Yum is a citrus fruit, so in essence you’re getting either the equivalent of a Lager-Top (that’s a splash of lemonade) or a Lager and Lime, something like jamming a wedge in a Corona if you will

Much paler than the Pilsner and with a large firmer but just as bright white head in the glass. not as lively carbonated in the glass.

Aroma is kind of a musty thing, there’s no hint of a citrus inclusion .

I’m sure that this is different every time I have it, this time the citrus hit is really light and faint, and this carries with it an underlying mustiness.

So not the first time I’ve had this, and I’ve still not got on board with this, which plays more to that unease about what it is they’re presenting.

Also I think it reaffirms that I’ll tolerate a lager or pilsner but there’s not a lot of places to go with them, and tossing in  some lemon, or citrus, however exotic can’t mask the fact that it is the empowered new clothes.

With this you don’t get the best of any world, for me it is an average lager with an average flavour addition.

The pdubyah-o-meter rates this as 7 of its things from the thing. I might be critical but I try to be fair, and if you’re beer can’t make a 7 then possibly you shouldn’t be making a beer. This is rightly liked by people who like Lager and Pilsners and I’ve got nothing to say about that , except for me, yeah na.

Music for this:  ”Alternative 90s   I got the lazy on and Spotify gave me a playlist that started with this,