Elation Native Beast – The second of the Sunday Stouts and along with some outstanding vinyl music I’m  not having a lot of trouble smiling.
I promised this against the outstanding Clements and Daughter Booozed Bunny stout that I  just had, and I know that this beer, the Native Beast, is also very good, having had it on release  from the fill-station and though it was well proper.
It’s going to be tough against such a good beer though

Unleashing a 500ml bottle of a beer will give you something that is 8% ABV, and has 40 IBU things, this is around 240 calories a serve size, and is 3.2 standard drinks in NZ
Elation Native Beast is a beer in the style that is a Stout – Imperial Flavored brrewed by Elation Brewing Company in Auckland, New Zealand (Their office address is just a couple of kms from here, I should pop round sometime 😉 ) 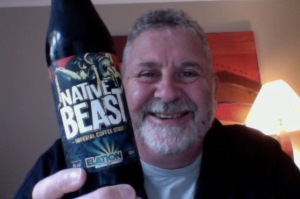 A big bold Stout with deep coffee & chocolate notes and a fruity finish.

It uses fresh coffee beans from their friends at Weta Coffee.
Brewed for GABS 2017.
Unleash the beast!

Lots of Coffee on opening this one, milky coffee.

Pour is deep charcoal black with a large head that is light and bubbly.

It loses that coffee/chocolate/milkiness  aroma when it is in the glass which is a shame. 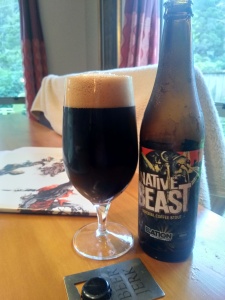 There’s a lot of carbonation in this, which is problematical as it interferes or detracts from the taste that you’re thinking you’re getting, so it’s not easy to pick out any of the things that the brewer might have intended.

There’s coffee, and there’s slight bitterness if you really look for it, the whole doesn’t finish to much and it’s quite a short drinking drink in this version.

Not at all like the “oooof” that I remember. Could be too cold though.

It’s not too cold, but it is now just like drinking a fizzy cold brew coffee. there’s no substance in the middle to this beer and it’s kind of flat and one dimensional, which is a great pity an shame.

So here I am, an album from a few years ago, and a beer from a year ago, the album is still great, and yet my experience of the beer this time is less than memorable. It’s odd how things can be like that.

The beer of course warms more, but it never gathers itself more, I’m going to lay blame at the carbonation for this, it’s annoying and does nothing for the enjoyment of the beer, I just don’t enjoy that constant prickling, this is not the beer for that.

I’m pretty sure that if I could get the bubbles gone that I’d be a a big fan of this beer. Alas.

The pdubyah-o-meter rates this as 7 of its things from the thing. It’s ok, but it’s not good. It’s nice coffee flavour, but too fizzy. Lovely aroma but I want to drink my beer not smell it. I’m really disappointed as I’m pretty sure this was the full noise when I had it less than a year ago,

Music for this:  ”Sines by Jakob   No singing involved in this just a listen-along.

Sines is the fourth studio album by New Zealand post-rock band Jakob. It was released through The Mylene Sheath records on October 21, 2014.

Imperial stouts are usually extremely dark brown to black in color with flavors that are intensely malty, deeply roasted and sometimes with accents of dark fruit (raisin, fig) and chocolate. The bitterness is typically low to moderate. Imperial stouts are strong and generally exceed 8% ABV

This entry was posted on May 26, 2019 by Philip Walter in Beer, Beer of New Zealand, Beer Review, Brewed By, Craft Beer, Critic, Elation Brewing, Imperial Stout.