Garage Project Triple Day of the Dead 2018 – an 11% Black Lager. Tequila Barrel Aged Chilli Chocolate Black Lager if you want to argue the point . This year model. Well the latest version, I’ve previously had the 2016 and 2017 versions  They Rated a 10 and a 9, so there’s a big expectation in this beer for me.

Garage Project Triple Day of the Dead  sits in the style that is a: Schwarzbier  and is brewed by: Garage Projectis who are  in Wellington, New Zealand

It’s a lager, but definitely not as we know it.

Triple Day of the Dead. Black lager inspired by the Aztec beverage xocolatl – this batch brewed extra strong with smoked chipotle chili, cocoa and agave, then aged for over a year in freshly emptied Tequila barrels, and finished on raw cocoa nibs. Incredibly rich and dark,

Triple Day of the Dead possesses a uniquely complex mix of spice, oak, smoke chocolate and restrained chili heat. A true celebration of the dark side.

Well I cleaned the LP, it hasn’t been played since the last time, when. Mad the Cheese plate, and because no one ever asked today it’s Creamy Blue Brie, Some Spanish Choritzo, some stuffed peppers and sea salt cracker, of course there’s pickles, no point going half way there is there?

That aroma is one of peppery chilli and a sweet note of chocolate.

The pour is of a brown chocolate beer that looks languid and uninteresting, which isn’t the first time in the last few days I’ve said or thought that about a beer. An whilst there was a head it’s all gone and this beer sits there now brooding black, headless, and looking like a glass of warm cola. 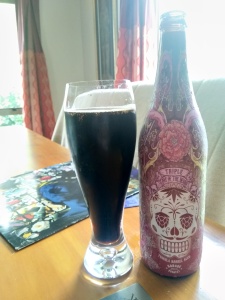 The aroma from the glass though is one of tequila, which I’ve got good at picking, and if you sniff too hard it catches and makes you splutter, at least it did for me. Didn’t stop me doing it twice though.

So it looks uninspired and dull. It smells alright though.

This version is surprisingly soft to drink, it lightly carbonated, and has a nice softness about it. Then it grabs your attention with a spike to heat and spice leaving a gentle warmth at the back.

I’m surprised that this is quite soft at the front, the lovely aroma doesn’t quite convey what’s coming, and that the spice and heat are so insistent and quite strong once it gets over that initial hurdle.

They’ve dialled down the alcohol in this years beer, and that’s evident in that lack of burn and tang that you can get, this only makes that Tequila hit and that spice set more apparent. The Chocolate of course at the fore readying you for that surprise, I was going to say onslaught, but it’s more a skirmish.

So where am I with this?  It seems to be a far to polite beer to be a flag-bearer for Dead of the Dead. I had forgotten that  it was a dark lager, and who reads old reviews anyway, so I  did go in mostly blind on this.

There’s no passion, no fire, no eye-watering moment when you gasp at the audacity and cleverness of the brewer (as I have in past) and either I’m getting older, wearier and more cynical or this just isn’t the beer it has been. I’m quite enthusiastic about good beers, unusual beers, and well made beers, and this is all those but it’s just not a beer that lives up to its past versions and has fallen short. It’s like itself has become weary with it all.

However, it is still and adventure beer, and 650ml is rather more for sharing than a single sitting, I’ll soldier on though. It’s been lovely with the snack plate I made, but alarmingly there is more of that missing than beer drunk, which tells me where the flavours are.

This version, for me, is a bit of a one trick beer, which is that  tequila rider and then that spike of chilli heat. I had a high expectation because this is an annual beer, they’re beers you wait for, long for, hope for, and they bring back the memories of past.  If this is that beer than the past was problematical and I’ve had the rose tints on.

Which might be the problem, you can only drink the beer in front of you, and that you wrote previously  that you thought a beer had ‘oakiness’ or ‘high astringency’ doesn’t necessary make it so, take  the 2017 version where I fantasised :

Importantly though, that sharpness that I’m giving to the Tequila part is just a point on the flavour, it’s not the flavour, or the distraction, it’s just one of the interleaves of this, a thread to the whole.

Probably why I ca’t make any money as a beer blogger, but for this version I’ve got in front of me where I’m distracted bu that Tequila, and crediting that softness of mouthfeel to Chocolate in some way, and oh wait there’s that chilli hit.  It just isn’t right.

The pdubyah-o-meter rates this as 8 of its things from the thing. It’s not the beer it has been. It is quite nice and it is rather too polite and sensible.  Don’t panic  – an 8 is very good, there’s only Great and Awesome after that. Again I didn’t think the rating values through, but this is very good beer. It is very good beer. It’s very clever, it is very balanced, it’s not that flash looking in the glass, but it has aroma, and it has identifiable and enjoyable tastes, not some made up stuff, these are things you know, and can relate to,

How bad can a beer beer if the worst thing I got is that it’s doesn’t look flash in the glass but it’s a nice drinking beer with no surprises and taste things that you recognise rather than imagining that that prickle or hint is that secret ingredient.

That I’ve written over 1,000 words might indicate that either it’s  ‘the” bomb or is ‘a’ bomb. Ask me about my Album Choice, I dare you, and how it appears to be in near mint condition.

Music for this:  ”Tonight (2018 Remaster) by David Bowie which I have on Vinyl but you can listen along of course.

This album is appalling, it’s schmaltz and pop over creative and sensible, it seems to be a contract album, toss it off and get it out of the way, except for perhaps “Tumble and Twirl” which despite the underlying awfulness fo the chorus background has hints that there was a properly good song underneath. I’ll just suggest that “God Only Knows” was a secret message.

If you didn’t join me on Spotify then you might have dodged one.

Any ale or lager made with herbs, spices or vegetables. The additive should be distinctive in the aroma. See beer description for flavor. Body, color, hop character and strength vary depending on the type of spice, herb or vegetable used.