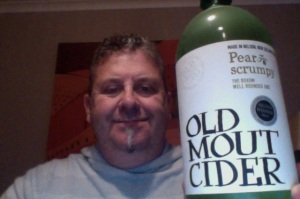 Old Mout  rhymes with fruit. Scrumpy – well remember when I were a nipper that we’d “go scrumping” which meant snagging an apple from a neighbours tree.

To the Old Mout pear scrumpy then, a welcome gift, and a welcome change to the beer diet.

The Old Mout cidery is in Nelson, and is a revival of an existing method. In a 1.25Litre pub pet bottle and at 7.9% this might be an interesting evening.

The summer of 2011/2012 saw an explosion of cider onto the market with various brands and target audience expectations. I thought I might have been cider-ed out, and with the exception of the highly regarded Rekorderlig Strawberry and Lime I’ve been giving it a miss.

To be honest the other reason I might have given the Old Mout a miss might have been the thought of a weird combination of fruit wine and cider, which kind of speaks to a “cheap” variation and a pop-cider that is aimed at a sweet-tooth alco-pop person. Not a serious cider. That and the fact that the brew giant DB recently brought a  control of Old Mout cider which again hints at bulk over substance.

So anyway, never wanting to look a gift horse in the mouth, and being prepared to eat my words I prepared to give this a completely unbiased chance. For real.

It’s clear, clear as water, three’s not a lot to give away whats in the glass, the odd bubble, it’s not therefore overly carbonated.  Smells of Musty fruis. And the taste is an intrigue. It’s not sweet, its not sour. It does have alcohol that you can taste in the background. I had to check again that this was pear cider.

It’s ok. It really is. and an evening or afternoon of this will end with you thinking pleasing things about the world.

Of course arbitrarily I’d be expected to pick an arbitrary number on the pdubyah-o-meter and using the 12 sided dice I came up with an easy 4 from 5. Crisp, clean, un-offensive this ticks many boxes. What will make this a winner though, despite big brewery involvement, is the crafty aspect of the brand,and you’re not going to get a sideways looks for having this in your supermarket basket, or your beer selection at the bottle shop.

AND as a bonus I have a flavour one coming up………..

This entry was posted on August 12, 2012 by Philip Walter in Beer, Cider, Justsaying and tagged Cider, Monteith, Nelson, Old Mout.