Shepherd Neame Spitfire, this has been in the beer fridge for an indecent amount of time, mostly because of the amazing amount of  beer that’s not available in the  stores. Of course its brewed by Shepherd Neame it’s Styled as a a Bitter, and it’s a visitor from Faversham, England 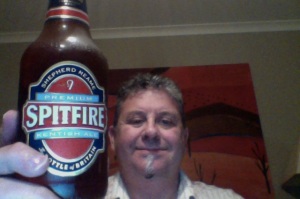 Originally produced in 1990 as a bottle conditioned 4.7% premium bitter as part of the 50th anniversary of the Battle Of Britain. Pint of 4.5% ABV beer, with a dinky cap that reminds you of a roundel that you see on Spitfires et al from the war movies.

Your starter for 10 on this that you’d expect it be of a quality and therefore deliver something a bit special.

I brought this in my English beer moment, and I’ve had a few beers since then, it’s nice to go back to the old country and your roots, because that’s always a good baseline.

Pours like a pint, couple fingers of good white foamy head, yusss! The aroma is instantly a throwback to pubs from my past, the sweet malt smell, ah public bar  ’79……..

wow, as a change of pace this is a full flavoured beer, it’s englishness is apparent. Sweet malts, toffee, caramel, and an understated hop. It’s a nice english beer coloured beer, when you go back to one from the previous trip around the world it becomes clear that the English have their own thing going on.

This isn’t drop dead shut up! beer, it’s just beer. It’s English beer, it is beer that you get in he pub, and sit in the snug or in the garden and drink, a few times. There’s not moment of ‘wow’ or do they sell it in bigger than a pint sized serving, it’s just a beer. A Fine English beer. Alright!

Because I’ve got a bit more “picky” at beer, this however does end up as “thin”, let’s be fair though, this is from a billlion gallon container and a mass market, which it does in aces.

The pudubyah-o-meter has to have a duel purpose. 6-10 arbitrary things as is, the rating of all things arbitrary. but picking a beer for someone, and you want to have a bit of old blighty this would be 8-10, and not much by way of disappointment, middle of the road, unprepossessing and a bit mild mannered, a great supermarket beer where nothing is offensive or challenging.

There  are so many better beers than this, but you know what? Like a blankie this is something that you know at some point you want to have a hand on, you could easily get drunk on this, play some darts and tell some stories, and then go and do it all again the next day.

which reminds me I have another in the fridge… stand by….